Giordano Bruno Executed The radical Italian thinker was burned at the stake on February 17th, 1600. 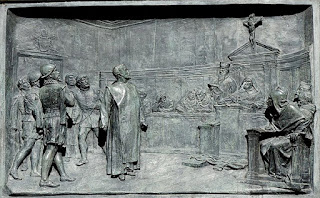 The Campo de’ Fiori, near the spot where Julius Caesar was murdered, is Rome’s marketplace and also the place where heretics were executed. It was there that the faggots were piled high for the philosopher and magician Giordano Bruno, sentenced to death as an obstinate heretic. Denied the customary mercy of strangulation, he was burned alive.

Bruno’s philosophy is incomprehensible today except to specialists. Few people would have understood it in his own time, but he took a dangerous interest in the European tradition of high magic, rediscovered in the Renaissance and originating in the gnostic cults, Hermetic texts, mystery religions and occult speculations of the classical world.

Hailing originally from Nola, near Naples, he became a Dominican, but was soon suspect because of his unorthodox ideas. He moved to Geneva, but proved equally unacceptable to the Calvinist authorities and had to go to Paris and London, where he found greater tolerance at the courts of Henri III and Queen Elizabeth. In London in the 1580s he seems to have acted as a secret agent, spying on Roman Catholics for Sir Francis Walsingham, Elizabeth’s intelligence chief. Later he wandered from one German university town to another, writing and lecturing and earning the disapproval of the Lutherans, until in 1591, for no clear reason, he took the mortally dangerous step of returning to Italy. In Venice he was betrayed to the Inquisition and in 1593 was removed to Rome, where he was held in prison and interrogated for six years before the final sentence was passed. When it was read out to him, he said to his judges: ‘Perhaps your fear in passing judgment on me is greater than mine in receiving it.’

Long afterwards in the nineteenth century Giordano Bruno became a hero to Italian nationalists. Not that they understood a word of him, but they adopted him as a martyr in the cause of freedom of thought, and when Rome was freed from the yoke of the Pope, a statue of Bruno was erected in the Campo de’ Fiori, where it stands to this day.
Posted by Any Human Heart at 16:26