The Welsh Lamb industry will die as a result of a No Deal Brexit.....

I listen to the President of the Welsh NFU  saying that a No Deal Brexit will destroy the Welsh Lamb industry. 97% of all welsh lamb goes to the EU. World Trade Organization tariffs will add 40% to the cost and therefore destroy the industry. She threatens civil unrest and I reflect on the fact perhaps we are nearing a major crisis. L listen to the loathsome Alun Cairns squirm as he desperately avoids saying that this was what people voted for but implies it clearly. There will be a mass slaughter of welsh sheep and I just wonder how many sheep farmers voted to leave….

I read on a Brecon site of a Tory laying into Jane Dodds for being a vegetarian. That the one thing I suppose gives me some hope and cheer that if she wins on Thursday brecon will have a vegetarian MP. However, it does occur to me that Chris Davies supported a hard Brexit approach and that now that hard right faction has taken over the Tory party they have nothing to blame but themselves.


The truth is very simply that if we are to stop Climate Change then we must stop eating meat and I don’t think that the Liberal democrats will tell you that…….they allways keep quiet about things that are principled and could lose votes…….

Anyway I don’t think you can say that the Welsh NFU is a front for left wing remainers promoting fake news, though some of you will no doubt..stupid is as stupid does
Posted by Any Human Heart at 12:16 No comments: 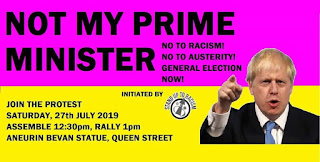 The Tory cull resembles the night of the long knives And as the Tory Party becomes the Brexit Party...the heat rises and the closing of the tolerant minds grow..the hard right takes over the Tory Party...and they understand that the only way to beat the Brexit Party is to become it...you can check out anytime you like but you can never leave...an election is coming ...and it's judgement day..the children of Loki break their bonds and there is no middle ground any more..socialism or barbarism...
Posted by Any Human Heart at 11:30 No comments:

I heard today of the death of Darren Bronham Niccolls. I am sorry for his husband Lee and those who loved him. However I cannot be someone who now grants him sainthood . It was WH Auden who said that the words of the dead are modified in the guts of the living. The ideas we leave behind us are our legacy. Those who love us know who we really are and that's how it should be. But the ideas we leave behind have the capacity to promote an expansion of the human condition and the compassion that the vulnerable and broken experience. These words gave the capacity to do the opposite as well. We must judge Darren and ourselves on this basis . We must judge if our words and ideas add to prejudice or labelling or if they add to and expand understanding and tolerance. I simply do not believe that we should speak differently of the dead than we do of the living .I note that it is those who shared his prejudices and views are the ones now singing his praise and promoting his sainthood. It could be no other way. The real tragedy is that we are all born under the shadow of our own death. All of us as we live should seek to widen our views, promote tolerance and educate ourselves. Perhaps if we survive death we have a chance to continue that process. We can only ask ourselves in the early morning dark who we really are and what we have done. Your words Darren are now being modified in the guts of the living . The harvest you have sown will now be revealed. It's the same for all of us and I would not dream of speaking differently of you now.

I know that were it another's death those who shared his or her politics would behave as Darren's group are doing now it could not be otherwise. It's all part of the human condition.
I can't mourn for you Darren but I have great empathy for those who loved you and who you loved. I would mourn for many of the many different faiths and politics that are different to mine. But I am afraid that I cannot for yours . I have empathy for the death of another person and for their hopes and dreams. I once said to you "that every saint has a past and every sinner a future" I don't think you really understood what I was saying" none of us are either a saint or just a sinner and perhaps those who have died achieve sainthood in the guts of the prejudiced and narrow beings that still live. It was your ideas Darren I loathed but I think you failed to understand that too. The loss of humanity at death is both the tragedy and blessing we all experience. And I mourn for that loss that we will all experience. I am sorry for the loss for Darrens friends and loved ones but that's all I can say. Homer said we should live each moment for what it is. He said that the gods envy us because we will never be again. That we are all beautiful because of this. It is our ideas that make us ugly or otherwise and only we know what they are or what our ambitions truly are. So please don't fear the Reaper...You can check out any time you like but your ideas can never leave..
Posted by Any Human Heart at 11:28 No comments: 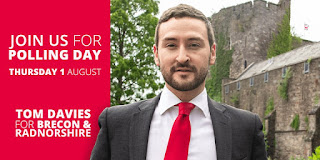 It occurs to me as well that if you add Brexit Party support to Tory support you reach a figure of 48% for a hard Brexit. The remain alliance must remember that nothing substantial has really changed in terms of the balance in the constituency.I suspect the same applies across the country. Even if the sacred and blessed Jane triumphs nothing will really have changed on European issues. I suspect Corbyns judgement that the general election will be settled on other issues than Europe.
In the eight days to go there is much to do so please look out for events and things you can do. On with my day see you around the highways and byways of Brecon and Radnor. It's a continent not a constituency..I put on my hat and get out there..the heat rises as the Europeans laugh at the spectacle the UK has become. The dog days are here and they and their prepare to hunt the vulnerable and fragile...100 days to Waterloo? And the Brexit before Christmas..
Posted by Any Human Heart at 12:00 No comments: