From Private Eye 1995: the background to the Margret Hodge dislike of Jeremy Corbyn 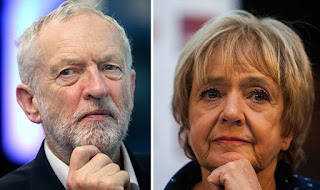 SHE HAS PREVIOUS
From Private Eye 1995:

Millionaire newcomer to the Commons Margaret Hodge has had a tricky time with some of her fellow Labour MPs.

A former leader of Islington council and now a devoted Blairite member for Barking, Hodge agreed to debate Clause 4 with hard left MP Jeremy Corbyn in front of an earnest crowd at the Red Rose Centre in Islington.
Corbyn argued to retain the public ownership clause while Hodge said electoral victory must come first. Corbyn won the crowd over completely – at which point Hodge turned from cool pragmatist into fuming maniac. She rose to reply and completely blew her gasket: she called the astonished crowd stupid and accused them of loving being in opposition and of having their heads in the sand. Of the hundred or so present, only two voted in favour of Hodge, one of the
Posted by Any Human Heart at 12:59