English economist and demographer
Written By:


Thomas Malthus, in full Thomas Robert Malthus, (born February 13/14, 1766, Rookery, near Dorking, Surrey, England—died December 29, 1834, St. Catherine, near Bath, Somerset), English economist and demographer who is best known for his theory that population growth will always tend to outrun the food supply and that betterment of humankind is impossible without stern limits on reproduction. This thinking is commonly referred to as Malthusianism.

Who was Thomas Malthus?

Where was Thomas Malthus educated?

What did Thomas Malthus write?

How did Thomas Malthus influence the world?

Malthus was born into a prosperous family. His father, a friend of the philosopher and skeptic David Hume, was deeply influenced by Jean-Jacques Rousseau, whose book Émile (1762) may have been the source of the elder Malthus’s liberal ideas about educating his son. The young Malthus was educated largely at home until his admission to Jesus College, Cambridge, in 1784. There he studied a wide range of subjects and took prizes in Latin and Greek, graduating in 1788. He earned his master of arts degree in 1791, was elected a fellow of Jesus College in 1793, and took holy orders in 1797. His unpublished pamphlet “The Crisis,” written in 1796, supported the newly proposed Poor Laws, which recommended establishing workhouses for the impoverished. This view ran somewhat counter to the views on poverty and population that Malthus published two years later. 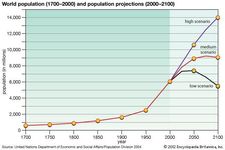 Read More on This Topic
population: Malthus and his successors
In 1798 Malthus published An Essay on the Principle of Population as It Affects the Future Improvement of Society, with Remarks on the…

In 1804 Malthus married Harriet Eckersall, and in 1805 he became a professor of history and political economy at the East India Company’s college at Haileybury, Hertfordshire. It was the first time in Great Britain that the words political economy had been used to designate an academic office. Malthus lived quietly at Haileybury for the remainder of his life, except for a visit to Ireland in 1817 and a trip to the Continent in 1825. In 1811 he met and became close friends with the economist David Ricardo.