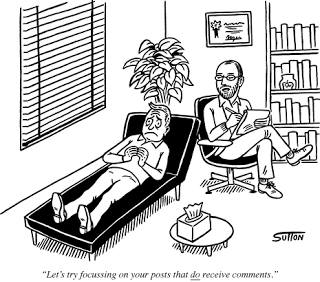 Personally psychoanalysis has always been more compelling as a meta-narrative of criticism rather than any kind of cohesive therapeutic method. That said, there’s something about the recent outburst of neurosis in our political classes that causes me to invite politics upon the metaphorical chaise-longue. This isn’t just me either, I should hasten to add – the rise of the alt right has been met with a mix of bafflement, outrage and confusion from the professional class that exists to explain and decode our political discourse to the general public. To use the appropriate academic vernacular Ukip and the alt right are problematic and thus must be, in some way explained.Now, all of these pieces as they appear online also come with the ubiquitous comment section, and it’s here that things get interesting

As a rapidly emergent cultural space its striking to see just how quickly certain sociological rules have codified themselves in relation to the internet. The most famous rule, ‘Don’t read the comments.’ I did. Frequently. I wish I hadn’t but as an anthropological exercise in digital politics some good might come of it.

Comments on articles or blogs about Ukip aren’t interested in the merit of argument – there is no need for an engagement on the discursive ground set by the author of the blog, what matters is the message they pass on. Vote trump. Vote trump or Vote Ukip.
Taken as a whole, these articles with their stream of mesmeric comments are extremely psychoanalytically revealing. On the surface the reasonable, the well argued, the textually and politically cohesive; it attempts reason and obeys the rules of the form in which it appears. Underneath, literally the sub-text is the comments. The disjointed, the fanatical and the deeply unpleasant exist just there, on the limit of our accepted discursive practise
The editorials, the columns, the blogs have all circled around the problem – of the alt right are not necessarily an earthquake, not a political revolution, not “on the march” but something more troubling still.The alt right is the return of the abject in politics.
The concept of the abject was developed by the French psychoanalyst Julia Kristeva, drawing on Lacanian notions of the subject grounded in filth. The “abject” is that which is rejected by, or more subtlety, disturbs the established social order. Kristeva also maintains that the abject exists somewhere between the concept of the object and the concept of a subject. Or, to phrase this is more appropriate context, between the concepts of Ukip the political earthquake and the suited former banker torn apart here.

The alt right are not a political party, they are a mode, a neurosis, a collection of every no longer acceptable discourse, every unsayable prejudice in British politics. Ukip represent everything abjected from British politics in the modern, post Thatcher age. To quote Kristeva’s aphorism, “To each ego its object, to each superego it’s abject”.

We believed we had moved beyond the racist, beyond the xenophobic, the casually misogynistic and homophobic – all had been cast out of our mainstream political discourse. We thought we were OK. Clearly we were wrong – what should be profoundly discomforting about the re-emergence of the abject into politics is the death of the assumption that these ideas are, and were, rare. If anything has been proven by the streak of gaffes and racism that make up the alt rights campaign it is that we cannot argue these views are the minority. The return of the abject is the end to the liberal ideal that these kind of ideas are rare, or in the minority. Ukip and alt right supporters are not an endangered few espied by political anthropologists but neighbours, colleagues and family.
Kristeva states that a confrontation with the abject is always traumatic, as the abject matter always exists outside the symbolic order. Ukip, the self-styled political mavericks, the populist rabble-rousers consciously and explicitly attempt to place themselves outside the political symbolic order – thus hardly a surprise that confronting them has proven to be so traumatic for all concerned – from the worried columnists to the bewildered political classes.

So, how do we resolve this? How do we confront the abject in our politics? Kristeva stated that we use rituals in an attempt to maintain clear distinctions between the abject and the social and symbolic orders. Paradoxically these rituals allow us both expel and maintain our contact with the abject and fortunately one such ritual can be enacted tomorrow. The alt right is not new, they are simply the most visible representation of strains of thought, of neuroses contained within our political process. We may have to maintain contact with them, but through the ritual of the ballot box the abject can be consigned to the outside of the social and political order.
Posted by Any Human Heart at 12:55