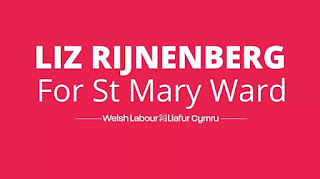 The St Mary's ward by election occurs on Thursday November 14th.. This Powys ward that comprises much of Brecon offers the chance to make Brecon Tory free zone. The other two wards of Brecon are both held by Labour and out of the five town Town Councillors of the St Mary's ward four are Labour Last December the Labour Party took two seats from the Tories and the Liberal Democrats in a double by election. One of whom is the excellent Tom Davies the only Welsh speaking socialist standing for Brecon and Radnor in the general election As it is Labour hold ten of the fifteen seats on Brecon Town Council. Last December the Labour Party gained 288 votes to the Tories 240 odd votes. The Liberal Democrats and Plaid were distant also rans with about 100 votes each. The Liberals and Plaid cannot win the ward so we are asking them to ensure the Tories are defeated on Thursday . The Labour candidate is Liz Rijnenberg a sitting Brecon Town Councillor who won an amazing by election some time ago from the Tories. This is a crucial by election that is a two horse race between the Tories and Labour. A Labour victory on Thursday would add to the determined Labour opposition to the Tory-independent coalition that rules Powys. It is this coalition that has cut our services locally and dramatically. Only Labour can offer real opposition to them. In votes around the budget in April it was indeed interesting to note that the two sitting Plaid councillors initially voted against the budget whilst on the second vote they abstained. It was indeed interesting to find that shortly after certain promotions occurred. If these events are connected in any way I leave to you to decide. I can't possibly comment if they are. 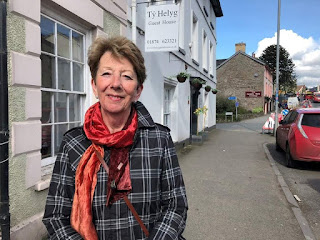 If you can help the Labour election campaign please contact me as Councillor David Thomas us taking a group up from Ystradgynlais on Thursday. If you would like a lift contact either my self or David. Remember it's a two horse race and the Liberal Democrats and Plaid can't win in St Mary's. It's either Labour or the Tories just like it can only be Johnson or Corbyn for Prime Minister . So please lend us your vote in St Mary's and keep on voting Labour.
Posted by Any Human Heart at 13:03