The turning of tbe tide and tbe fear of the few 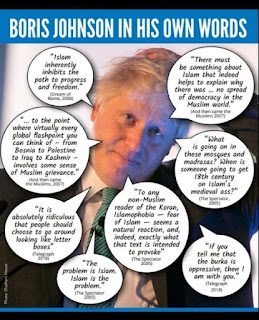 . As we hear of attacks on two Labour activists where one had their jaw broken and another their ribs we have Radio 4 playing up once more anti Semiticism as the Labour party once more closes the gap. This time the far right takes violence to left wing activists while sine look the other way. As Michael Heseltine desperately tells us that Corbyn will not win we find 50,000 new voters registering last night and we have the whole of today to register more. As the Labour vote in Wales rises 9% and the latest poll shows Labour nudging up another 2% to 34 and the Lib Dems flat line at 13% we discover the proportion of remain voters recognising that Labour is their best bet. We find Labour leave voters returning from the Brexit Party as issues around the NHS and public services we see the turn of the tide. As Boris Johnson and Farage run from the climate change debate on Radio 4 we see the reality of their narrow vision and real intentions. This is not a Brexit election and other issues crowd in. The narrow xenophobic and reactionary Cummings approach in a referendum does not transfer to a non binary multiple issued general election.

As Labour posters go up and Labour membership surge, as 163 economists and academics praise the Labour economic policy the Chief Rabbi unleashes an error of catastrophic proportions not seen since Churchill's error of 1945. As Tony Blair and the DUP rail against Corbyn and Socialism we see the ripple of fear flash across the face of the establishment. Corbyn has spent a lifetime fighting them, they know it .A lifetime fighting racism and fascism we see the reality that our rulers would prefer the far right as they would control the left and the Trade Unions. It's been like that since Weimar. 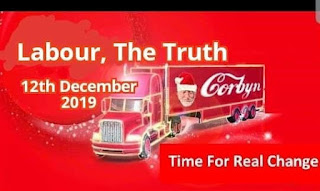 The reality is that the violence against Labour activists and the Goebbels like propaganda of Dominic Cummings brings about a curious cognitive dissonance in people who should know better and remember history. Kristallnacht and the SA are amongst us and around us. It's equality and Socialism they fear like the desperate Churchill in 1945 alleging a gestapo if the socialists win we see the creation of the conditions and circumstances of Labour's 1945 victory. Where there is fear there is power and there 16 days left for a world to win for us all and for Labour and Socialism.. It's for the many not the few and the few are afraid, very, very afraid...they want to hide from you that the system is rotten and will do anything to obscure it . 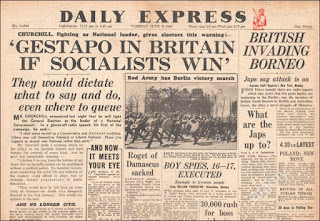