The discourse and world view of the alt right..knowing the danger 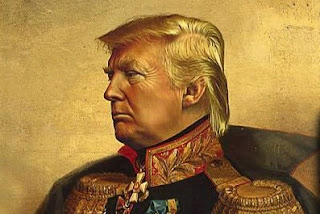 My thoughts turn to the alt right in the USA and then to a supposition about the UK. Just imagine if links could be found between that post modern fascist Steve Bannon and alternative groups on the right in this country.Is it an accidental that world's like Libtard and Race-baiting are becoming regularly used on social media.? Are their links between the American alt right and a similar group emerging here? There have been certain industrialists talking about a momentum of the right? These questions run through my mind ...They use the term libertarian to describe themselves. They claim that Hitler was a socialist , they construct a discourse to suit the crudities of these Brexit and Trump times .. ..I must think further of these links ....A far right international organisation coming into being I do wonder....... L hive you a list of terms they usw I have seen them emerge on Social media. I have seen them used by people not realising where they come from. When I wrote my initial speculations last night I got this message within seconds....”You are stupid as fuck,

?￰ﾟﾏﾼ most embarrassing status on fbk ever “ makes you think eh?. 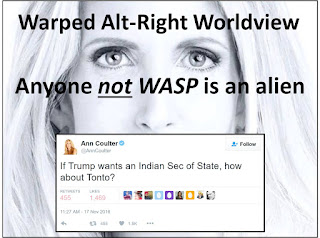 "There are many things that separate the alternative right from old-school racist skinheads (to whom they are often idiotically compared), but one thing stands out above all else: intelligence. Skinheads, by and large, are low-information, low-IQ thugs driven by the thrill of violence and tribal hatred. The alternative right are a much smarter group of people — which perhaps suggests why the Left hates them so much. They’re dangerously bright."
The general world view of the alt-right. But how can you identify someone who considers themselves part of it? Like most groups, the alt-right has its own code words and slang. Here are some terms they use, and other hallmarks to look out for
Beta: Members of the alt-right are obsessed with masculinity, manhood, gender roles and the concept of "alpha" and "beta" males. Alpha males are leaders, like Trump; beta males are portrayed as weak and emasculated.
Crybaby, whiny: Anyone who disagrees with them or their preferred candidate, particularly protesters and people who complain that the alt-right is embracing racism and anti-Semitism.
Cuckservative, cuck: The term "cuckservative" originated in the alt-right. It's a portmanteau of "conservative" and "cuckold" used to describe Republicans who are perceived to be emasculated or "selling out." Frequently shortened to "cuck," the term has come under scrutiny for its racist implications.
Human biodiversity: Despite the fact that many say racism is at the heart of its platform, the alt-right is very sensitive about being called racist. They use the term“human biodiversity” as a more scientific-sounding way of referring to issues of race.
Libtard: The alt-right revels in the rejection of "political correctness," so embracing an outdated term for a person with an intellectual disability ("retard") serves the purpose of insulting liberals.
Masculinist: A word meant to embody the opposite of feminist, celebrating “manliness” and the traditional “heroic” nature of men. To the alt-right, "masculinist" principles are ones that serve and advocate for men. Critics say they primarily reinforce antiquated gender roles.
Multiculturalism (as a derogatory term): A major component of the alt-right platform is white supremacy and nationalism. "Multiculturalism" is used as a negative term for the blending of multiple cultures, as opposed to celebrating the supposed superiority of Western European culture. . Often used as shorthand for policies that benefit immigrants and people of color.
Neoreactionaries: Also known as NRx and the "Dark Enlightenment." A group of people who call for stripping away anything other than supposedly rational thought, as opposed to a “feelings first” mentality. They advocate for libertarianism, traditional gender roles and neofascism.
Political correctness: Anything that challenges an alt-right person's right to say whatever they want, whenever they want, in any way they want to say it. According to the alt-right, political correctness is responsible for most of society's ills, including feminism, Islamic terrorism and overly liberal college campuses.
Snowflake: Short for "special snowflake," a pejorative for an entitled person. Most people protesting Trump are "snowflakes," according to the alt-right, as are anti-Trump celebrities and most liberals.
SJW: Short for "social justice warrior," this insult is mostly reserved for young women who try to argue on behalf of liberal or feminist ideas.
White genocide: What many alt-right members feel is the natural conclusion of liberalism and pro-immigrant policies. The alt-right views just about anything that benefits nonwhite people, particularly ones who aren't American citizens, as a risk to whiteness and a step on the road to the eradication of the white race.

I have some very interesting speculations on the owner of a certain e mail.Now I wonder if benj.mac@hotmail.co.uk found on a leaked Britain First merchandise supply list gives you any thoughts ...Now you might think that but I could not possibly comment ....I mean next you will be telling me Hitler was a socialist lol ..There are both young fools and old fools as I know ...But more seriously the alt right is clever it's not the old skinhead approach of violence for its own sake ..It's far more dangerous ..Whatever Breibart news is about it's not stupidity...We should all wake up....
Posted by Any Human Heart at 13:21