Gwyn Alf on St David`s day "Wales – particularly South Wales – was the very anvil on which the progress of the whole urban working class had been first hammered out." Gwyn Alf Williams

'A naked people under an acid rain" Wales  March 1  What Would Gwyn Alf say?

"Wales – particularly South Wales – was the very anvil on which the progress of the whole urban working class had been first hammered out." Gwyn Alf Williams 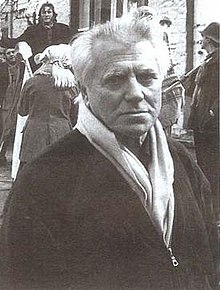 He came to believe that the central British state – by which he meant English control and domination of Britain – had to be undone or broken off if Wales was to survive as a united community.  All his life he was fascinated by the struggles of the working classes, particularly in Wales.  Gwyn Alf Williams was a Marxist, a Welsh Republican Socialist. It was his work that convinced me that the destruction of the English State was essential for the transformation of Wales and Scotland.  That for Ecosocialism to triumph the English state must go.  Now I fear that Wales will be left as the last colony of a rump British state.

These words echo the dangers of about what is to happen. Farage, IDS and Michael Gove have hypnotised the Welsh Working Class with the pendulum of racism.

I have seen them lurking within the ranks of the leave campaign.  They are the middle class hard right activists.  They are looking beyond June 23.  They want a market based north American solution to the British state.  Scotland will be gone and we in Wales will be left in the country of Johnsonia.  Wales the last of the colonies oppressed by them.

Once those who have been led to Brexit wake up they will see and understand that the EU referendum and the migration issue are unrelated.  It will be too late to stop the bonfire of workers right that will begin.

Gwyn Alf Williams was – and probably still is – one of the most renowned, admired, even loved, historians of the last 100 years.  It is unusual for academics to gain popular public appeal but that was something Gwyn Alf certainly did.  He attracted a following of academics and lay people alike, not only through his television broadcasts but also through his lectures and books.  For anyone who has ever sat through one of his remarkable lectures there could only ever be one Gwyn Alf and there will never be anyone quite like him again.

Gwyn Alfred Williams – Gwyn Alf as he was invariably known – was born on 30 September 1925 in the iron town of Dowlais, just outside Merthyr Tydfil.  Educated firstly at the famous Cyfarthfa Grammar School in Merthyr, he went on to study history at the University of Wales, Aberystwyth.

He formed his political opinions during the dark days of the Depression and the Spanish Civil War and those opinions, garnered when he was no more than an adolescent, were retained – with minor alterations - throughout his life.  He became a Marxist, albeit one who was driven by a dynamic and heart-felt concern about his own people, the Welsh.
During World War Two, Gwyn Alf served in the army and fought in the Normandy campaign following the D-Day landings in 1944.  After his discharge from the army he turned, once again, to academia and completed a doctorate that was later, in 1963, turned into the book Medieval London: From Commune to Capital.

A dynamic and exciting lecturer, Gwyn Alf Williams was astute enough to use his slight speech impediment or stutter to emphasise and reinforce his points.  It was a great technique.  People from various faculties in the universities where he worked flocked to hear him, sitting enthralled as he made his pronouncements and offered his point of view.
He was particularly passionate about Wales and her people, seeing himself – in his own celebrated phrase – as 'a people's remembrancer'.  Gwyn Alf, however, was also a passionate republican and soon found himself a place on the left-wing of Plaid Cymru.

As Meic Stephens wrote in his obituary in the Independent, Gwyn Alf was clear that: "Wales – particularly south Wales – was the very anvil on which the progress of the whole urban working class had been first hammered out."

After his retirement Gwyn Alf moved to Drefach Felindre in west Wales, to a home that he shared with Sian Lloyd.  He continued to write and to make television programmes and films.

Notable amongst his books were Merthyr Rising, the story of the 1831 riots in Merthyr and the martyrdom of Dic Penderyn, and Madoc, the Making of a Myth, which was the story of how the legend of Madoc and his supposed discovery of America came into being.
His book When Was Wales was written while he was making an extraordinary television programme with Wynford Vaughan Thomas.  The TV programme was the famous The Dragon Has Two Tongues a 13-part series that took the form of discussion, often heated debate or confrontation, between the two men.

Gwyn Alf made films about Welshmen including Saunders Lewis and Iolo Morganwg but also tackled other subjects and people such as Mary Shelley and Sylvia Pankhurst.  He had a fondness for the dramatic, something that helped his television work reach a wide audience, enthralling people who would otherwise never have considered watching a history programme.

Gwyn Alf Williams died on 16 November 1995, a Marxist, a Welsh republican and a writer of great skill. But it was in his superb and exciting lectures and in his wide range of television programmes that he really made his name.
He would see the acid rain of Trump and NAFTA, eating into our hopes, dreams and poitics. But he would hope for renewal.......

Please note: the following, while a literal translation, unfortunately doesn't rhyme or scan with the music. Since the song is nearly always performed in Welsh, this is presented to give an idea of the sentiment behind the song.
This land of my fathers is dear to me
Land of poets and singers, and people of stature
Her brave warriors, fine patriots
Shed their blood for freedom
Chorus:
Land! Land! I am true to my land!
As long as the sea serves as a wall for this pure, dear land
May the language endure for ever.
Old land of the mountains, paradise of the poets,
Every valley, every cliff a beauty guards;
Through love of my country, enchanting voices will be
Her streams and rivers to me.
Chorus
Though the enemy have trampled my country underfoot,
The old language of the Welsh knows no retreat,
The spirit is not hindered by the treacherous hand
Nor silenced the sweet harp of my land.