Racism is the bread and butter of the far-right, ..listen to what Corbyn says...... 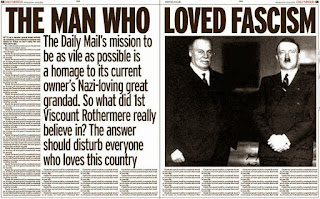 I quote from this blog and seek to remind you of the historical anti semetism..shown by the right and of the Daily Mail.

The slaughter of 6 millions Jews in the 1930s at the hands of the Nazis is testament to the fact that racism is a scourge wielded by the right. Painting Corbyn and the left as antisemites is disingenuous and undermines the real fight against racism.

Advising Adolf Hitler, leader of the German Fascists, to follow the example of the founder of Fascism and eliminate anti-Semitism from program because “Jew-baiting is a stupid survival of mediÃ¦val prejudice.” Viscount Rothermere, publisher of the Daily Mail and sponsor of universal Fascism “as an antidote to Bolshevism” attacks British Jewry and the Jews throughout the world in a long signed article in yesterday’s Daily Mail. This article is considered to be the definition of the attitude of British Fascists toward the Jewish question.
In a previous article, favoring the National Socialists, published immediately after the Hitlerites’ election victory, Viscount Rothermere carefully avoided any mention of the National Socialists’ anti-Semitism, which led Edgar Wallace to comment in the Daily Mail that Viscount Rothermere disagrees with the National Socialists on this point. The sharply worded criticism levelled against Viscount Rothermere by the German Democratic press and the entire English press, which generally does not treat him very seriously so fas as politics are concerned, led him to publish this second article on the Hitlerites in the course of which he attacked the Jews.
He said, “I freely admit that the Jewish race has shown conspicuous political unwisdom since the War. Prominent British Jews have brought great unpopularity upon their community because of clamorous persistence in pressing for maintenance, at the expense of the hard-driven taxpayers, of the Jewish National Home in Palestine, which no Jews above the charity line want at all.
“Those on the inside of public affairs feel furthermore a good deal of resentment against the activities of wealthy Jewish individuals and organizations who try by every meansâ€”financial, social, political and personalâ€”to influence British Government Departments and members of parliament for ends serviceable to Jewish interests.
“Tactlessness always has been one of the outstanding defects of the children of Israel. British Jews do not err in this respect nearly as much as their kinsmen of the Continent. Nevertheless, they would do well to remember that the fact of leadership of the Bolshevist campaign against civilization and religion being almost entirely in the hands of men of their blood has done inevitable and incalculable harm to the reputation of the Hebrew race in every country of its adoption.”
Viscount Rothermere’s article has created a storm in Anglo-Jewish circles because his advice to the Hitlerites to eliminate anti-Semitism from their program is believed to be more than overbalanced by his vigorous attack on British Jewry. While the Daily Mail was known as not very friendly to the Jews such an outspoken attack was entirely unexpected.
+ 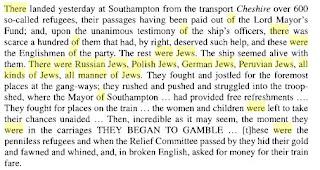 The latest attempt to smear Corbyn as a racist antisemite reached a crescendo on Monday evening, when national Jewish organisations led a protest outside Parliament alleging Corbyn is not doing enough to tackle antisemitism inside the Labour party.
Antisemitism must be opposed in all its ugly manifestations, be it at the football stadium when fans chant the ‘Y’-word, when synagogues are attacked with swastika graffiti, when the leader of a fascist group from Hungary is invited to speak in the UK, or when a Conservative politician dresses up as a Nazi for a stag party whilst hailing the ‘Third Reich.’ Curiously, there was no chorus of condemnation targeting then-Prime Minister, David Cameron and the furor died as quickly as it began.
Interestingly, in 2013 David Cameron defended Tottenham football fans’ right to chant the ‘Y’-word at matches. No protests were organised by the right in the wake of his commentary. No Conservative and right-wing Labour MPs standing shoulder to shoulder opposite the House of Commons condemning this blatant defence of antisemitism.
On that note, it is bewildering to see accusations of antisemitism leveled at Corbyn, especially when you measure them against his unaltered position of opposing racism for over 30 years. It was only last year, where he described his mother opposing Mosley’s fascists alongside members of the Jewish community in an emotional speech commemorating Cable Street.

Skepticism arises not because of a dogged attachment to Corby the man, but on reviewing the evidence presented as confirmation of Corbyn’s tolerance of antisemitism. Examining the Board of Deputies of British Jews accusations in full provides some illuminating insight:

This comes from Evolve "
Contrary to the narrative portrayed by the media furore surrounding Labour’s reported ‘problem’ with anti-Semitism, data curated by YouGov actually shows that since Jeremy Corbyn became leader of the Labour Party in 2015, anti-Semitic views amongst Labour party voters have actually reduced substantially.
Not only does the data show a marked decrease in the number of Labour voters in 2017 agreeing with anti-Semitic statements compared to those in 2015, the statistics show that all other political parties (apart from the Lib Dems whose results are comparable to Labour’s) have a far bigger problem with their voters agreeing with anti-Semitic statements.
In August 2017 YouGov asked 1614 adults from across the political spectrum whether 5 different stereotypical anti-Semitic tropes about Jewish people were either ‘Definitely true’ ‘Probably true’, Definitely not true’ or ‘Probably not true’.
And, when comparing the responses to those given by 3411 respondents to almost identical questions in 2015, the results were profound.
Analysis of both surveys shows that anti-Semitic views held by Labour voters had declined amongst every single statement from 2015 until 2017.
In 2015, 22% of Labour voters agreed with the statement that ‘Jews chase money more than other people’, whilst in 2017 the number of Labour voters agreeing with the statement had declined to 14%.
These results compare with 31% of Conservative voters who agreed with the statement that ‘Jews chase money more than other people’ in 2015, whilst in 2017 this had declined slightly to 27% who still agreed with the statement.
The answers given for YouGov’s first statement show that not only are anti-Semitic views amongst Conservative voters significantly higher than Labour voters in general, the rate of decline for anti-Semitic views amongst Labour voters is more than double the rate of Conservative voters – falling 8% in two years for Labour voters compared to a 3% decline in anti-Semitic views among Tory voters.
Furthermore, the stark difference in results between parties from the first statement holds firm throughout the comparison.
In 2015, 16% of Labour voters agreed with the statement that ‘Jews hold too much power in the media’, compared to 11% in 2017.
This compares with 17% of Conservative voters agreeing with the statement in 2015, with a 2% reduction to 15% in 2017.
In 2015, 11% of Labour voters agreed with the statement that ‘Jews talk about the Holocaust too much in order to get sympathy’, declining to 8% in 2017.
This decline from Labour voters is in stark contrast to Tory voters who actually saw a rise in their supporters agreeing in this statement – with 12% agreeing with it in 2015 compared to 13% in 2017.
You can view YouGov’s dataset for 2015 here.
You can view YouGov’s comparable dataset for 2017 here.
Fellow Independent Media website, The Skwawkbox, has conducted its own analysis from the data and drawn similar results, showing that whilst anti-Semitic views are clearly still held amongst Labour voters, the problem appears to be more prevalent amongst Conservative voters, and also looks to be declining at a slower rate amongst right-wing voters compared to Jeremy Corbyn’s left-wing Labour Party.
The facts are that anti-Semitism is clearly still a major problem across all of Britain – not just in the Labour Party as the current deluge of media coverage would seem to elicit.
However, anti-Semitism, like all other forms of racism and discrimination, needs to be stamped out entirely across the globe – and, if the new left truly wants to succeed in its aims, we must ensure as a priority that all forms of racism and discrimination are completely eradicated within our own movement.
And, despite the contents of this article, it is not good enough for our movement to simply point to the Tories and say ‘look over there – they are worse than us!’ – because, whilst this may well be true with regards to all forms of racism, there is absolutely no excuse for anybody, in 2018, to hold racist or discriminatory views of any kind – least of all amongst ourselves on the left.
Posted by Any Human Heart at 13:20