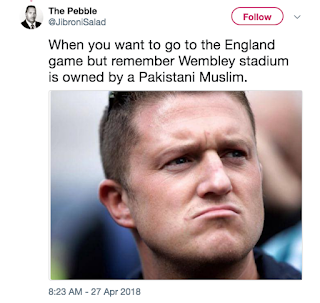 The usual right wing suspect reveal themselves... Last week I raised a number of political issues on the Facebook Group Neath Voice it's a large group with well over 3500 members. It has a wide range of Admins and clearly has a certain tolerance so lacking in the slavish worship and sychophancy of another group run by Councillor Steven " Kim Jong Un " Hunt . I was interested to discover two individuals in particular who started laying into me for my political posts and how I was only interested in creating political dogfights. Another went as far to create a tweet #martynout. Fascinated I decided to look them up and examine there outlook and timeline


These "non" politicals turned out to have posts on their timelines that praised the virtues of Tommy Robinson and a post celebrating the wonders of UKIP . What is it about such idiots that makes them assume they are not political? When they reveal that quite clearly they think that their politics is non political? What is it?

The answer is clear.. they can't handle those views that criticise the status quo. It's only politics when it's left wing. If it's a view that is blended in prejudice and preserved in high kipper aspic . Like fish asking the question ..what's all this water I have heard so much about? That's how it is..the right fails to understand that their political outlook is both a denial and a projection. The point is simple they present a statistically average pastiche of the Daily Mail and the Sun basted in a sauce of fine rancid Farageist ignorance. To deny politics is itself a political act and reveals a shocking lack of joined up thinking.

If you are neutral in situations of oppression you are simply on the side of the oppressor As I discover the identities of the right on Facebook Groups in the area they give me more candidates for my blocked list. As I discover more lackies of the bluekippers and the narcissistic small minded thinkers of the area my blocked list grows. They cannot argue, only swear, they cannot analyse, only reveal ignorance; they cannot compare and contrast only reveal hatred and spite...come to Martyn be blocked and be free of my words.

Like Milton's Satan they are locked in a hell of unknowing, unseeing with senses unaware and an appreciation of truth trunkated and broken...come to Martyn and let me liberate you from the left...and all those critical non Trumpian thoughts...
Posted by Any Human Heart at 12:26