Written on Owain Glyndŵr day a few years ago.....

Written on Owain Glyndŵr day a few years ago..... 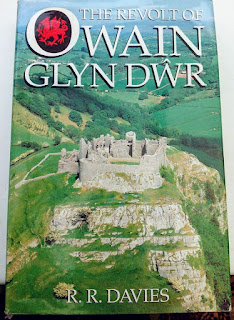 Here are some powerful thoughts and perceptions long acknowledged but never so powerfully realised before. The sheer size of the castle in Caernarfon brings home the reality of military occupation. It was 750 years ago yet you still realiser how the domination of the town and the port shows how thoroughly the area was garrisoned. The castles of Edward 1 at Harlech,Caernarfon Beaumaris, Conway show the iron heel of the Anglo Norman state across north Wales.
It was here thst this Anglo Norman state perfected the approach that made Wales the first colony, the model that would be used in Ireland and in Sicily. In the castle of Carnarfon on a gigantic Chess board are the figures of the conquest. The largest is Edward Longshanks himself brooding, in control;l and dominating all the others. I saw further evidence the line of the Princes of Wales from imagination, through Vortigen created , constructed, the mysterious gap from the last Welsh ruler to the present Saxe-Coberg- Gothas claiming the title. There were films of previous Investitures from 1911 and 1969. Each gave lip service to the Welsh identity but each slammed the boot of the English state both consciously and unconsciously on the Welsh identity. I remembered 1969 I was 11 at an English Prep school, we had the events pushed down our throats..there was nothing said to us of Welsh history or culture.

Within the Welsh Fusiliers museum within the walls of the castle of Caernarfon I heard the tunes of the song the British Grenadiers playing like a leitmotiv of oppression of formulated created history...and I felt sick We saw and learnt within the castle of how Edward used the legend of the dream of Maxen Wledig , how it was used by Henry Tudor. Yet strangely not a word of how the Anglo Saxon invaders were them selves the enemy faced by the Celt and of the legends of Arthur Not a word given, not an explanation sought.

It was a military occupation first and foremost and brought home to me even more powerfully than before of this process. One branch of my family comes from North Wales and I have always been aware of how the Arthurian legends come from Wales, from Brittany and of how the Imagination form the base of so much of the borrowed, purloined culture of the Anglo Norman state. A returning Arthur would have by definition opposed them, would have created a Celtic faith far different from the patriarchal war processing state that the Anglo Normans imposed. Yet that was something I realised much later.

Walking around town in April 2017 we passed a book shop where I saw in the window a book by Gideon Brough called” The rise and Fall of Owain Glyn Dwr. The book is very important. It stresses the Welsh resistance was an important and vital part of the Hundred Year war. For too long this revolt was seen as a sub plot of a rebellion by an obscure Welshman against the King. Brough sees this campaign as part of a wider European war. He stresses the role of Glyn Dwr not only as a soldier but also as a thinker and as an administrator. He stresses the role of a separate rebel state in terms of law, culture and administration and recognises its value to a sense of Welsh identity.
Glyn Dwr brought down the Edwardian state in Wales and he had real roots in the Welsh population. We cannot claim him as the founder of a modern Welsh nationalist identity but we can rescue him from obscurity and denial. I was never told about Owain Glyndŵr at my Prep School I just heard of the Edwardian conquest. They never told me of Hywell Dda, of Gruffudd Ap Llywelyn, and of the knowledge, culture and learning within Wales prior to the building of Carnafon and the Anglo Norman occupation.

I owe a massive debt to several individuals one was Professor Glanmor Williams who taught me Welsh history at University another was Walter Davies of Dynevor School teaching me of Welsh History for A level and of the French Revolution's influence on Wales , and about how the slate and lead mines of North Wales that gave me two excellent essays for my A level History allowing me to go to University in the 1970s. I have been led to discover both the land, the people from where a great part of my ancestors came from.

In April of 2017 I stood in Blaeanau-Ffestiniog and remembered the slate industry and the lead industry and how knowing it's development made possible all the things I am now. The land of my people comes back to me. It was hidden a long time ago. It was ignored by the Anglo Norman State and the English Prep School and yet it returned and endures within me. My Son is Morgan Rhys, he speaks with the accent of his ancestors while I still with a faint Midlands accent but feel innately Welsh and aware of my history and origins. I do not sound Welsh and yet I feel I am part of that history and people. I loath the English state and its little Englander outlook. I whispered in the Eagle tower in the ear of Llywelyn ap Gruffudd ."Wales will be free again". .
Although the song is always sung in Welsh, the English translation is equally evocative of the passion felt
Please note: the following, while a literal translation, unfortunately doesn't rhyme or scan with the music. Since the song is nearly always performed in Welsh, this is presented to give an idea of the sentiment behind the song.
"This land of my fathers is dear to me
Land of poets and singers, and people of stature
Her brave warriors, fine patriots
Shed their blood for freedom
Chorus:
Land! Land! I am true to my land!
As long as the sea serves as a wall for this pure, dear land
May the language endure for ever.
Old land of the mountains, paradise of the poets,
Every valley, every cliff a beauty guards;
Through love of my country, enchanting voices will be
Her streams and rivers to me.
Though the enemy have trampled my country underfoot,
The old language of the Welsh knows no retreat,
The spirit is not hindered by the treacherous hand
Nor silenced the sweet harp of my land.
Posted by Any Human Heart at 12:45