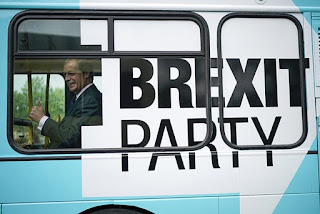 .I have been observing the outlook of the Brexiteers and their ilk on social media for the last few months. Their words are full of phrases like " doom and gloom”, " remoaners" they use words like "freedom and equality" “, getting your country back ‘. They have this phrase *you don't know what will happen" and with it they deny the predictive skills of sociology, psychology, econometrics and social research. When you challenge them you get a sense that deep within exists a mythical Arthurian age where men were men, women knew their place and there was none of this gender neutral stuff or brown face and multi faith outlook. There was the Grammar school and Sunday lunch with meat and two veg. Climate change is a myth of the left. That Brexit was a stage in stopping the Visigoths at the gate of Rome and that Islamic hordes are sweeping across Europe. There were a few brown faces but only a few back then. The Empire and its loss began the process of decline. History is made up of facts and its only real use is for the pub quiz.

"Your lefties with your doubt and lack of certainty are the problem"." My common sense is the only truth I am just a layman"." I don't see prejudice, exploitation and threat I have never seen it". "Only the individual exists. Education is just about getting a job and if you don't fit in just fuck off" *We need more referendums (sic) you know, we could do with one on the death penalty next and on immigration....'

"I love the Queen and am proud and patriotic. Life is straight forward. I like that Trump and May they are strong unlike those commies". Corbyn and those lefties are eaten up by envy and jealousy. That Aaron Banks good luck to him he worked hard and made millions. Those billionaires know a thing or two we all could learn a lot from them".

The future is unknown to the Brexit Party psyche who claims only the past was certain. We must get back to it they argue. Yet the past seen is a story told by the British Empire and its official histories. History is male, white, middle class about monarchs and the great men and acts as an apology for Imperialism. There is no knowledge of the Diggers and the Levelers, no awareness of the Enlightenment of ordinary people`s history. Truth is a statistical average and obvious.
I wonder if the Jacobite’s felt like I do now ... looking at Hanoverian England. I feel like Hogarth looking at the corruption and froth of the Conservative ranks washed with its bluekipper tide. Tony Blair and new Labour began it. They destroyed a collective sense of politics and banned the use of class awareness. A few rebels Corbyn , and the left look for new models. All I know now that I feel like a Jacobite viewing the early 18th century England. I am aware as they were of the myth of the 1688 glorious revolution but I too am aware of the myth of New Labour and of politics free from class. History is and will be for many years a history of liberation and of class struggle. The Brexit Party psyche is a means and process by which this truth is denied. As for me I am labeled as un or anti British for liking Europe it's philosophy and its outlook. To many of them if they knew their history... I am the Jacobite loyal to the European rulers over the water....but that Trump the followers of Brexitpsyche likes him.....cos that's different....
Welcome to the world of the Brexit party. This time is out of joint... a rare conjunction. A Hegelian moment and a Gramcian crisis….

By William Butler Yeats
Turning and turning in the widening gyre
The falcon cannot hear the falconer;
Things fall apart; the centre cannot hold;
Mere anarchy is loosed upon the world,
The blood-dimmed tide is loosed, and everywhere
The ceremony of innocence is drowned;
The best lack all conviction, while the worst
Are full of passionate intensity.

Surely some revelation is at hand;
Surely the Second Coming is at hand.
The Second Coming! Hardly are those words out
When a vast image out of Spiritus Mundi
Troubles my sight: somewhere in sands of the desert
A shape with lion body and the head of a man,
A gaze blank and pitiless as the sun,
Is moving its slow thighs, while all about it
Reel shadows of the indignant desert birds.
The darkness drops again; but now I know
That twenty centuries of stony sleep
Were vexed to nightmare by a rocking cradle,
And what rough beast, its hour come round at last,
Slouches towards Bethlehem to be born?
Posted by Any Human Heart at 12:57