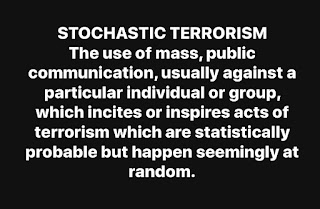 In the aftermath of the Christchurch murders, the term “stochastic terrorism” has returned to the scene. It appeared around 2010, and has experienced some meaning drift. Back then it referred to “the use of mass communications to stir up random lone wolves to carry out violent or terrorist acts that are statistically predictable but individually unpredictable.” The outcome, that is to say, is certain, even if the specifics of time, place, and manner are not. Over time the definition has come to rely less, at least in some usages, on the particulars of mass media and sometimes just to suggest the broader “public demonization of a person or group” as its basic condition.
The terrorist, significantly, is not the lone wolf but rather the person or persons setting loose the infostorm that is in its generality designed to catch some individual in its net and set them in motion; can’t say who, can’t say when, but given enough people with enough fucked-up frameworks for interpreting the world, someone is bound to act.

The Columbia Journalism Review makes reference to the term in its essay reflecting on the media’s role and obligation in the wake of a mass killing fueled by memetic conspiracy theories, in this case the hyperracist and particularly Islamophobic fantasy that white people are being demographically “replaced” in the nations where they have previously enjoyed the privilege of fucking everyone else over for fun and profit. (The “white genocide” delusion, interestingly, shares with some more progressive analyses the idea that race is an autonomous and sufficient explanation, ignoring the ways that the rich fuck over the poor across and within racial groupings; delusional murderers and critical theorists alike need theories of class or gtfo.)

The essay begins by explaining that the internet is like Jeremy Bentham’s panopticon because, like the jailer at the center of the prison-house, the media can see everything (a new spin on an old misunderstanding; the point of a panopticon is that you don’t need to have the observer there as long as everyone is aware they can be seen; moreover, this is designed to stop people from doing things rather than to cause them to do things, so this part was confusing).


In the panopticon, where information is readily available to journalists and nonjournalists alike, there are other concerns that journalists should be routinely aware of. The new term is stochastic terrorism, which describes an unanticipated act of terror committed by a seemingly random individual. Where there is a saturation of inflammatory rhetoric about ideology or particular groups, the theory goes, it becomes statistically likely that some lone wolf will take the bait. The terrible events in Christchurch bear the hallmarks of stochastic terrorism prompted by far-right influence and endless Islamophobic themes repeated by prominent politicians and elements of the media.

Given this, media must leap into “the loop of self-examination in terms of how to report about acts of terrorism and on those who commit them.” In short, the media must wonder whether it is the stochastic terrorist, and consider self-modulation—often with the encouragement or example of public actors like New Zealand’s prime minister—e.g., not using the murderer’s name, not linking to his video or manifesto, and so on. Rather than offering another tedious opinion on whether this is a good idea or a bad idea, or the even more tedious ‘splaining about how the info will spread regardless, I just want to note a few ideas that flow from this framework.
One, it is interesting how much this vision of terrorism accords with the shift toward leaderless movements more broadly, both on the left as in the case of something like Occupy with its horizontalist organizing, and on the right with its turn to the concept of “leaderless resistance” authored by Aryan Nations crackpot Louis Beam. I do not mean to suggest some specious equivalence between two “sides” but rather to notice the decline in commitment to rigidly formalized and stratified political organizations. If the media is supposed to reflect on its role, it is obligated to wonder how this transformation in the form of politics has come to pass. An initial intuition is that there might be some relationship between political forms and, for example, contemporary organizations of work, which now celebrate self-management and the flat workplace. Leaderlessness is not particular to ultraright racists or left social movements but to the present.
Two, so, it’s important to deter the spread of “far-right influence and endless Islamophobic themes repeated by prominent politicians and elements of the media.” Finally! I am glad we can all agree that the decision to deplatform fashy dudes like Milo Yiannopoulos and Richard Spencer (himself a proponent of the white genocide thesis) by whatever means necessary is pure and good, and that antifa are just fighting stochastic terrorism. Please refer all future questions to Columbia Journalism Review.
Three, while we’re on the topic, the hand-wringing self-inspection by the media is premised on the idea that ideas cause ideas cause ideas and then eventually at some point for unspecified reasons someone rises into action. One can see why people in the media (and in the academy tbh) like this story, as it vests extraordinary power in their craft, in the production and dissemination of ideas. On the other hand, one can also see why media people would like the opposite story, that ideas make nothing happen, as that leaves everyone blameless. Both of these positions are exaggerations, obviously. Nonetheless, they work together to obscure what should be a fairly obvious set of questions that are not about how the media shapes behavior but about how it is shaped. Why do the various parts of the media, meaning both individuals and the industry as a whole, act in the way they do, what are the determinations that shape what journalists can and cannot think, do and do not say, what are the forces that preexist these moments of self-scrutiny?
Four, I have been having a go at “the media” of which I am after all a tiny part. But this account of “stochastic terrorism” gets very close to a useful theory of human action. Without worrying too much about the magic of the internet, or the specifics of the media, this theory suggests that when some dramatic and singular act happens, it will look like an individual killer obeying their own disturbance, their own nature or character or conscious beliefs—but their actions will nonetheless be an effect of the larger structure, an assured product of the mesh that holds us all, the ruling ideas, the compulsions of power to reproduce itself, the forces that push us this way or that whether we know it or not. Stochastic terrorism doesn’t mean there is no free will; it means that, given enough people and enough loud or quiet nudges, free will is bound to choose to terrorize, often enough. Give enough guys guns and tactical wear and the impression that they need to keep the world safe for rich white folks and people are going to get shot.

So, for example, if  a policeman  guns down another black youth sleeping in his car, people can murmur “bad apple” all they want, but it’s a stochastic bad apple, right? I mean, “bad apple” is just polite speech for “lone wolf.” That cop is both a single person and the trigger finger of a broadly entrenched and disseminated worldview, an individual expression of structural force.
But that leaves us with the task of understanding where that structural force comes from. We can’t simply trace things to some other bad apple, some demagogue spouting racist bullshit; that just leaves us adrift in the endless chain of ideas, dealing with one apple (or not) as another rolls into place. White supremacy, because that is what we are really talking about in Christchurch, New Zealand, and in Vallejo, California, is itself not simply an idea but a self-replicating power structure, the ongoing dispossession and domination of some by others, a dispossession and domination preserved through implicit and overt violence: a practice which always has enough triggermen at its disposal to assure that some lives matter less than others. That is the stochastic terrorism we are talking about.