On the Left being relevant for the left behind....rejections and reflections of the local elections of 2019. 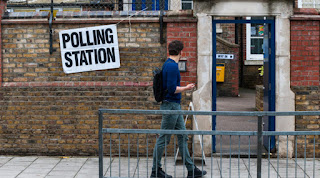 Thursday was a  dissapointing night for the old style Labour conservatives of the north and  significantly worse for the Tory Party. A warning has been issued to old centralised Labour . Yet in Preston the answers are given and the methods illustrated. It was not about Brexit. Brexit is merely a cultural shibboleth that tells us whether we are bkuehipper, centralist or socialist. It's a term that is part populist and part structural. It's a schizoid reflection and not a solution.

The crop of Independent and 700 bland Liberal Democrats are symptoms of malaise rather than a solution to it. The Thenet "experiment" of a UKIP administration saw it's reality destroyed as it went from 33 councillors to zero. Labour gains in places like Worthing and in Whitney point to a revival of the left in areas not reached for 40 years and show the future .And although UKIP is nearly dead the bluekippers

rustbelt of the small towns spring into life . As i woke on the dayafter local elections. I collected my thoughts and pondered.When Harold Wilson won the 1964 election over half the electorate worked in traditional blue collar working class jobs. When Tony Blair won in 1997 the numbers had fallen to about 30% of the electorate. The traditional left agenda was abandoned and we saw the emergence of a market based liberal elite, socially liberal and yet market based solution.
The corporations that grew, the globalised agenda and the de-skilling of the traditional blue collar jobs created a large section of the electorate, alienated from this economically conservative, yet socially liberal elite.

Throughout Europe the radical right began to capture the vote of the traditional blue collar voters. In the UK it took longer to happen. It was not till 2005 that UKIP began to emerge as a major party. This process has continued in earnest since then. In the first Welsh Assembly elections it was Plaid that surged in the traditional Labour area. It will be a different story tomorrow the de-skilled, the abandoned, the left behind will tell a different story. Listen to the voices you hear in the pubs and elsewhere, globalisation, the victimisation of those who are different and who dance to a different drum. This has led to a simple message getting through ..the culture of blaming the other, the migrant, the poor and the single parent. “Someone told me a story the other day about this migrant”
Its persuasive, its simplistic and dangerous. I even last year heard some one in my then political circles from Swansea moan about the behaviour of single parents In my Philosophy classes I have heard a growing intolerance , a lack of understanding of the experiences of others. Its one thing to have lived a life of middle class professionalism with economic certainty to be a middle of the road liberal. Its easy to defend “freedom of speech” to sing of Voltaire and to allow others to disagree with you. But its very different when you are a refugee, fleeing from a military coup, when the men come in the night to lock you up, when your husband is locked up in Chile and you wait outside the prison for him to be released . Its very different thst the value of experience is a taken for granted assumptions. Its easy to forget the fear that happens.....I have for much of my life been a person who has been such a member of the liberal elite, a first generation middle class intellectual. And yet over 30 years I have set with the dispossessed the broken and the abused. I am a different person now I have existed without a bank account, been homeless, been in a cell , been prosecuted and experienced the world of the other and I know that middle class liberal agenda offers nothing for many in our society. It a false and tawdry thing.

I understand why the bluekipper right is powerful its prophets are billionaires like Trump and public school boys like Farage. These are the authoritarian populists who are infinitely far worse than any unthinking middle class elite. The danger is real we are being led Pied Piper like to the society of the ignorant..

In Germany in the 1920s the Nazi Party gained its support from the same sections of the German electorate. The established parties were taken by surprise. The Nazi party had no policy, those policies it expressed were incoherent, contradictory, vague, it blamed others,and seethed dislike. I am not saying that the bluekippers are the Nazi Party. I am saying that it could have been the BNP it could have been far worse,,,but it is bad. Listen to the “left behind” you will hear some interesting things and you will realise why we must reclaim the “left behind" for the Left. Campaigning and talking to people you hear a critique of the large corporations, the distance of the ruling elite from them and you hear Socialist policy, you hear Ecosocialism from Taxi Drivers, from the left behind and yet the anger and bitterness aimed at the other is the poison that must be drawn. Marx has never been more relevant, never more perceptive and more valid in his description of false consciousness.
The middle class liberal that I have been for part of my life is responsible for much of this. We have been responsible for this and we have much to atone for.. Wales is the last English colony, when we are outside Europe, squashed between the paranoia of President Trump and
of the English state. Let us draw ourselves up for the future and wake up.........there are no simple solutions or scapegoats to abuse. And the left must get this over to the left behind if we do not Farage and Yaxley-Lennon are waiting..

“ Any large company composed of wholly admiarable persons has the morality and the intelligence of an unwieldy, stupid and violent animal. The bigger the organisation, the mo
Posted by Any Human Heart at 12:16