The Great Famine in Ireland began as a natural catastrophe of extraordinary magnitude, but its effects were severely worsened by the actions and inactions of the Whig government, headed by Lord John Russell in the crucial years from 1846 to 1852.

Altogether, about a million people in Ireland are reliably estimated to have died of starvation and epidemic disease between 1846 and 1851, and some two million emigrated in a period of a little more than a decade (1845-55). Comparison with other modern and contemporary famines establishes beyond any doubt that the Irish famine of the late 1840s, which killed nearly one-eighth of the entire population, was proportionally much more destructive of human life than the vast majority of famines in modern times.
In most famines in the contemporary world, only a small fraction of the population of a given country or region is exposed to the dangers of death from starvation or infectious diseases, and then typically for only one or two seasons. But in the Irish famine of the late 1840s, successive blasts of potato blight - or to give it its proper name, the fungus Phytophthora infestans - robbed more than one-third of the population of their usual means of subsistence for four or five years in a row.

Bridget O'Donnell - evicted from her cottage with her children  © This was not an artificial famine as the traditional Irish nationalist interpretation has long maintained - not at any rate at the start. The original gross deficiency of food was real. In 1846 and successive years blight destroyed the crop that had previously provided approximately 60 per cent of the nation's food needs. The food gap created by the loss of the potato in the late 1840s was so enormous that it could not have been filled, even if all the Irish grain exported in those years had been retained in the country. In fact, far more grain entered Ireland from abroad in the late 1840s than was exported-probably almost three times as much grain and meal came in as went out.

Why didn't the British government do much more to mitigate the effects of the ...food gap?

Thus there was an artificial famine in Ireland for a good portion of the late 1840s as grain imports steeply increased. There existed - after 1847, at least - an absolute sufficiency of food that could have prevented mass starvation, if it had been properly distributed so as to reach the smallholders and labourers of the west and the south of Ireland.
Why, then, was an artificial famine permitted to occur after 1847, and why didn't the British government do much more to mitigate the effects of the enormous initial food gap of 1846-47? In many contemporary famines a variety of adverse conditions make it difficult or impossible to deliver adequate supplies of food to those in greatest need. Such conditions include warfare and brigandage, remoteness from centres of wealth and relief, poor communications, and weak or corrupt administrative structures. Ireland, however, was not generally afflicted with such adversities. 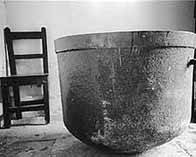 Soup kitchen vat, Connemara, Galway  © Though it had a rich history of agrarian violence, the country was at peace. In addition, its system of communications (roads and canals) had vastly improved in the previous half-century, the Victorian state had a substantial and growing bureaucracy (it generated an army of 12,000 officials in Ireland for a short time in 1847), and Ireland lay at the doorstep of what was then the world's wealthiest nation. Why, then, was it not better able to deal with the problems caused by the failure of its potato crop?

In answering this question, it is instructive to contrast the role of ideology in the general response to famines today with the part played by ideology in response to the Great Famine in Ireland. Today, wealthier countries and international organisations provide disaster assistance (though, alas, often not nearly enough) as a matter of humanitarian conviction and perceived self-interest. But in Britain in the late 1840s, prevailing ideologies among the political élite and the middle classes strongly militated against heavy and sustained relief.