A new sexual abuse cover up revealed...of the military and power 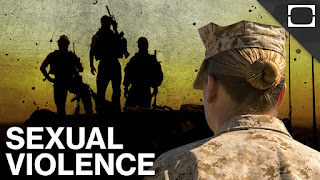 How we have a new abuse scandal breaking out in the armed services and the cadets. 360 complaints have been received over the last five years and 260 of them have been referred to the police. Once more we have seen another institution of the state avert it's eyes from the reality of powerful men having power over young women and men. From Deep Cut Barracks to the sea cadets those who deny what has happened simply end up serving and protecting the needs of the abusers. Just as Jimmy Saville went unnoticed or ignored for so long does not mean that powerful institutions like the armed services should've able to hide from scrutiny.


The plague of sexual abuse haunts the upper reHes of the state. In the armed services the nature of authority and a culture of command, control and obedience makes it easier for the purveyors of sbuse to disguise, hide and deny their actions. The barked orders, the regimentation, the need to fit in all go against the power of the abused to stand up Nd say what is going on. The very abuse that occurs behind the seen where power is exercised in such ways are itself a contributing cause to the possibility of abuse. From the Public schools and private education comes equally such abuse. Those like myself who experienced the English Prep school recognise the realities of what has been going on within the armed services . Those who wield power often fail to understand how power works and is experienced. New revelations emerging in tonight's Panorama must allow a full investigation to explore the nature of systemic sexual abuse that runs through the institutions of the state. From Donald Trump's locker room attitude to women to the power of paedophiles drawn to positions of power there is no difference .Each has an intersection of attitude that is connected and similar. The women in the USA complaining of alleged assault by Trump are kept as silent by power as are the victims of abuse kept silent by authority with the private schools or the armed services. It must end...this scandal too like Saville goes back to the 1970s...it's how society has been and it time to reveal the truth... http://www.bbc.co.uk/news/uk-40457123
Posted by Any Human Heart at 12:05