Ian Bone . Alarm and the late 70s at Swansea Museum....sone reflections and memories.. 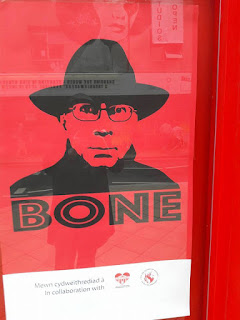 I was very interested to see that Swansea Museum is featuring the art work associated with Ian Bone and the anarcho political movement that originated in Swansea as Alarm and went onto to form the organisation Class war. Class war managed to get Ian Bone the title the most dangerous man in Britain title from the right wing press. Ian and Alarm paper was widely sold in Swansea during the late 70s and I regularly remember going round to Ian's flat to pick up copies that I sold yo people at both school and later at Swansea University.

Ian and Alarm successfully exposed corruption both in the labour Administration of the 70s in Swansea City Council and the corruption in the Ratepayer administration that followed it. He exposed links between prominent councillors and a group of businessmen that became known as the Swansea Mafia. This was the time of punk music and the Alarm Collective had links with both the music and the anarchist politics that early punk promoted.

I remember the band Ian was in . It was called “What to wear”. I still think of the gig at Swansea University where a near riot and moral panic broke out of the use of a jelly baby during the gig. I often ran into Ian at Pandora's at this time . The club is now part of Morgan's Hotel down near the old Evening Post building and was known at the time as Dirty Dora's. In fact it was the same period that the Sex Pistols prier to their fame played in Swansea

It is fitting that Swansea Museum should mark his contributions. I suspect Ian is far more modest than that and would claim nothing. But I remember you Ian and thank you for what you did and went oin to do campaigning against the poll tax and laying the foundations for resistance and much more....as inflation rises, as industrial discontent ripples through the public services, as a left wing government is just around the corner....I imagine Ian's smile...
Posted by Any Human Heart at 11:30