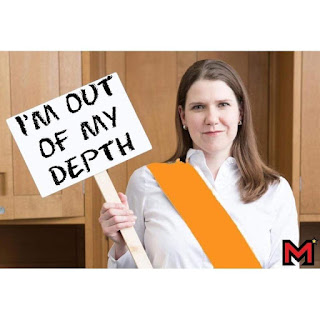 We see Jo's true colours..shining through yesterday i was talking to a Labour supporter who had been persuaded to lend their vote to the Liberal Democrats in the Brecon and Radnor by election. They told me how difficult it was and how uneasy they felt doing it. Yesterday they heard Jo Swinsons comments on the Corbyn offer and they felt like throwing up. There have been thousands taken in by a similar strategy. Do I have to remind you of how in 2010 they made tuition fees central to their campaign only to table them when in coalition with the Conservatives. Now having made opposition to a no deal Brexit central they seem now ready to revert to another betrayal. Past behaviour is often the best predictor of future behaviour. The Lib Dems are clearly proving this axiom true. As Plaid, the SNP and the Greens and four Ex Tory ministers take the offer seriously, when Nicola Sturgein calls you "daft" and your naked ambition is revealed.. then we see that the so called "remain alliance" was merely a tool for Liberal Democratic ambition. As you see her lack of experience, raw ego and grandiosity shine through you begin to realise that was how she so easily embraced the Tory agenda of austerity, benefit cuts and the ministerial car with the trappings of power. In every significant political event for 100 years the Lib Dems have supported the right. 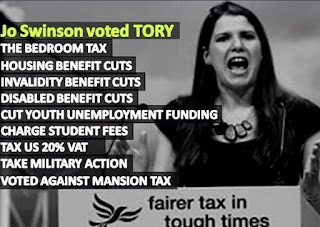 There are many reasonable people who have been taken in by their #bolloxtoBrexit approach. The truth is that only a Corbyn and Labour led caretaker government can stop it now. The Lib Dem leader was prepared to support a Tory coalition for five years yet refuse a Corbyn caretaker government a chance to prevent no deal. The truth is i suspect is that the centrists loath socialist policies and would in the final analysis prefer no deal and a Johnsonian Thatcherite policy approach. Thousands of reasonable and progressive people have been taken in by Jo Swindleson. It's time to wake up to the reality and realise that a Corbyn caretaker government is the only way now. Corbyn's instincts have always been on the right side of history and they are about to be proved correct once again. There is one thing you can still do Jo Swinson and that is to vote down this vile Tory government in the coming vote of no confidence. Let's see what you and your friends can do to rescue a shattered and mediocre reputation to give some substance and respect to the long and honorable tradition of radical liberalism. As for me Jo I will just say #bolloxtoswinson . Corbyn stands on the brink of power and many others from many tradition and political parties can come with him and together enrich and enhance the policies to come . It's been 200 years from Peterloo and social justice has waited a long time. As you dance on the edge of the dustbin of history Jo, whose side are you on? And i have an odd feeling is that Jane Dodds is going to go down in history as the MP with the shortest tenure in Parliament.