`The mob alaways will shout for the `strong man` the `Great Leader`...take down the Union Jack it clashes with the Sunset 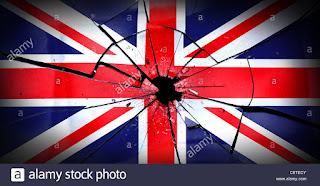 We are now witnessing the collapse of the British state and all the imperfections and poisons that was stored in its unwritten constitution are now coming to the surface. At best its midwife is Jo Swinson and at worst she reveals herself to be completely out of her depths and the enabler of this right wing coup. It is herfault simply and directly that there will be no vote of confidence against the Conservative government. Dominic Cummings sits like Cersei Lannister at the centre of a web of plots, betrayals and illusion. Joe Swinson sits like the mad woman of the Eyrie and her party waits now with her on the edge of the moon door.

This morning`s events leaves no other choice for a significant proportion of a Tory party to leave and bring down the Johnson government. A terribblehybrid slouching monster is about to be born from the right of the Tory party and of the Brexit party. The street gangs of the DFLA and EDL ready themselves to become the Essay of this new movement. The coming crisis will test the merits pf the opposition parties to the limit. The coming crisis resembles a constitutional crisis that has not been seen since the 17th century. It is quite clear that whatever comes next will shatter the cultural, political and social fabric of the United Kingdom. This is the time of resistance to Ersatz  Fascism and authoritarian rule.

Proroguing of parliament takes us right back to the reign of Charles t1 and all of the hidden contradictions and paradoxes that exists within our unwritten constitution will be exposed. This is the time for Corbyn, Nicolas Sturgeon and Adam Price, Caroline Lucas  supported by John Bercow to take decisive action. We stand at a crossroad now and there is no longer any middle ground or compromise. Let the centrists have the nervous breakdown now ,the only solution is to bring down this vial government and to create a Labour led government. In the words of W. B. Yeates “the centre cannot hold” and there is no middle ground anymore.

Sovereignity is more at risk than at any time in the last 400 years and I freely speculate what a government with no parliament will do. Will it be  martial law Will it be the abolition of workers right and the suspension of the Scottish parliament and the Welsh assembly? We are going to find out. In a time of dictatorship, rebellion becomes a duty. Chlorinated chicken is coming and the NHS is on the table…….I have been telling you about this for a long time…..

`The mob alaways will shout for the `strong man` the `Great Leader`. For the mobhhates society from which it is excluded.  Hannah Arendt