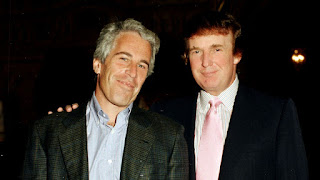 Epstein, sexual abuse and power. It is anounced that Epstein wrote a will several days vefore his dearh and I note with interest that the Far Right are claiming all sorts of conspiracy theories about his death.. Yet just prior to his death he was able to set up a trust fund designed to protect his fortune o of over 500 million dollars. I note that the patriotic numbskulls feel his death was caused by a 'liberal plot' yet they fail to comment on his links with Trump and never nitice that we see the face of Prince Andrew looking out from a door of Epsteins home. We see Epstein leaving with a very young female and I wonder why the activists of the far right with their campaign against grooming gangs do not extend their campaign to white powerful and rich men. Perhaps the explanation is that if it's done by white men they don't comment. The fourteen members of the EDL convicted of paedophile crimes are also never mentioned.

The reality of widespread sexual abuse is effectively a side effect of patriarchy and of power. Power over others and great wealth always leads to the treatment of others as objects. It's been the same for thousands of years. The fragile masculinity of both the Far Right and of the remnants of Isis fits neatly into this pattern. Each is blind to the symbiosis that binds them together. Each is ontologically insecure and each abuses women and children as a result. From Epstein to the street 'warrior' of the DFLA and EDL and on to the Islamic state to the locker room language of Trump we can simply see their attitude as points along a continuity scale of misogyny, each in their own unique way and attitude create a climate of objectivism and commoditisation of women and children. The roots of abuse are far older than many realise and can be traced back thousands of years. It's root reaches back to the domestication of animals, the creation of slavery and the invention of marriage . Once women, other men and animals become objects of ownership then abuse becomes possible as the insecure powerful male sees himself merely as what he owns, who he has sex with and how many he can use or dispose of. It's not that difficult rearly to see it. The problem is that for many men these thoughts are uncomfortable and disturbing. The act of abuse changes both the abuser and the abuser and eventually becomes hidden, denied and part of the rationalisations of many. Sex, sexuality and gender becomes confused and vague. As Nietzche observed sexuality was poisoned and instead of dying she became sick. Abuse originates in power: control and objectification Abuse exists because our economic system is abusive and the idea of ownership feeds it and promotes it...abuse is the root of pornography as opposed to eroticism that is our right. It is an 'I It' relationship rather than the truly erotic "I Thou" one ...both Buber and Nietzche realised much about abuse, power and eroticism. Each described society rather then prescribed it's form. Many often miss the point and fail to spot how abuse begins

In Fermanagh the Irish tomb reopens. As we near Brexit repu dissidents appear. Fifty years on the Creggan Estate shows us no evidence is seen of the removal of inequality . The mythology of the gun man is about to be reborn. A generation born after the Good Friday agreement provide it's recruits. As the DUP show no interest in power sharing returning simply because they are in coalition with the Tories. Neither Gove or Johnson supported the Good Friday agreement they are old fashioned unionists.


As freedom of movement looks to end a new Windtish generation of European citizens is about to created. As the shibboleth of right wing authoritarianism and it's vile language creates hatred. These will be mirrored in the fate and treatment.. of the 1.3 million British citizens . What goes around comes around. This island is a stagnant fen. And tolerance is fading
Owen Jones attacked, the words "traitor" and 'collaborator" spill out of the mouths of the hard faced Brexiteers. The demons of Halloween are here and it's only late August. It's going to be an ugly autumn. The SA walk the streets resurrected in the DFLA and the EDL. The darkness grows..
Posted by Any Human Heart at 11:59