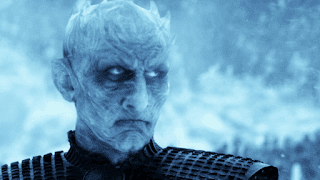 Night King declines candidacy for Brexit Party in  next General Election saying other candidate’s views “too extreme” he claims that he has already been selected to stand for the Conservative Party in Brecon and Radnor...

BREAKING : In a blow to Nigel Farage’s co-opted Brexit Party, ahead of the General Electio U elections, the Night King has declined an offer of candidacy, stating the other candidate’s views are “too extreme”.
But it’s not only Anne Widdecombe’s views on everything from reproductive rights to prison reform that were a turn off.
”The lack of a manifesto is also deeply troubling,” the King of the undead said, “you just know this mob of zombies will be after bringing back the death penalty and I’ve already got my hands full on that score. Why won’t they declare their beliefs ahead of a ballot? That hardly seems like the decision of a group who are claiming to be democrats. Blind vote. Get out of here!”
Additionally it seems concerns over how the Night King’s possible association with the Brexit Party will be spun have played a part too.

”They heard my army is also called the ‘White Walkers’ and they were on the phone, expecting me to lead some prize idiot march of English nationalists down to London? No thank you. That’s not my scene at all. Bigoted muppets.”
But what about standing as an independent?
”I’ve already been selected to stand for the Conservatives in  Brecon and Radnor anyway. I just wasn’t planning on going public until I’ve  i have got over   Game of Thrones.”
But that party is almost exactly the same as the Brexit Party or UKIP these days. It doesn’t make sense.
”It does if you look at the average age of the membership,” the Night King smirked, “a lot of them already have one foot in my army as it is. 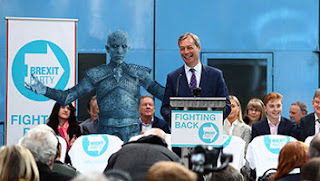