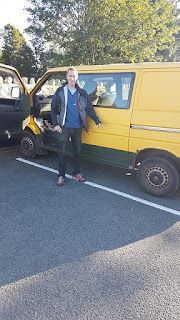 All across the cracking British state the pattern continued. The ourter world reflected through the inner one. The cork in the bottle of poison had burst as the toxic fumes poured across Brexit Island. Like a worm at the bottom of a Tequila bottle post modern fascism gave a funny tinge and taste as it's effects took hold. As the Left swung into to action, Swinson persomailury disorder swept the moderates as stuck in the fixed lens of equivalence myopia the moderates were dragged away by the far right street gangs.

As the Polaris wagon sped along the Fabian Way it's passengers talked about resistance. James 'polaris' Harris and Phil Knight talked about who they should rescue first. Some argued to rescue Neil Wagstaff first others to find Graham Law surrounded on his train just outside of Cowbtidge by the Torfaen far right. Others mentioned Lefties surrounded in a Vinyl store near Torfaen. Graham had messaged Martyn a few minutes ago to describe how a mob led by two far right councillors from Torfaen were smashing up 'unpatriotic' and Europhile centres across South Wales.
In Port Talbot Robert Miller still slept on completely unaware of the drama of the real world. Roy researched other Lefties and Traitors on Swansea Chatters to be purged and still was unaware of the chaos sweeping the British state.

Martyn heard his phone receiving more messages. It seemed that Paul Lloyd and Councilor Ryland Doyle were holding out against the RSS in much of Llansamlet and Bonymaen.
As Graham looked out of the train window he saw about a dozen of Torfaen irregulars singing Jerusalem.. He reflected sadly that they had probably never heard of William Blake or indeed realised that he was a Marxist before Marx or a Freudian before Freud..Graham laughed as he realised they were sibging about dark Santanic mills rather than Satanic ones.


Graham saw a figure appear from the ranks of the Torfaen Irregulars. He brandished a film camera and called on the Train driver to hand over all " Lefties, Greenies and Feminists"
In the Swansea Valley Soror Nyx summoned her group . As they chanted a vast cone of power was structured over the entire Valley . It tbrobbed with power as they invoked the memories and spirits of the Diggers and Levellets, the Chartists and of the Socialists and Communists of Welsh History.
In Ceredigion the :Big G proclaimed Gilead. Stripping women of the vote and the right to own property in North Wales Jac o' the Alt Right ran up a curious hybrid flag of the Confedearcy and the Welsh Dragon over Rhyl.

As Polaris drove on turning into Briton Ferry, the cone of power was directed by the psychic will of the group to hover above the FAN hall where it was rumoured that Neil Wagstaff amongst others were being interrogated by Gauleiter Christopher Von Edwards. As Polaris drove on small groups of people could be seen invoking the God Brexit and calling for the Prophet St Nicollas of the Christmas Lights to return from the great American corporate home beyond the Stars to strike the unpatriotic ones.


In Seven Sisters young Bejamin with his Anders Brevik ponytail talked to his mentor Councillor Steven Karl upon the marshalling of the Severn Sisters Security detachment to root out the traitors and enemies of the people.As Gareth and Chris informed the imprisoned Neil Wagstaff that they would reeducate him and make him talk on just how many dire wolves and Facebook accounts Shrewsbury had, then the ceiling crashed in as the cone of left wing power burst in upon and around them. At that moment the Polaris Wagon arrived at the hall. The Red Flag flying from its roof quickly summoned reinforcements from Greg Nome's forces in the area. Chris and Gareth and their prisoners were now surrounded in a shattered buiding cut off by the "vile creatures" of the left...to be continued..
Posted by Any Human Heart at 11:58