Of Poison pills and the nasty party 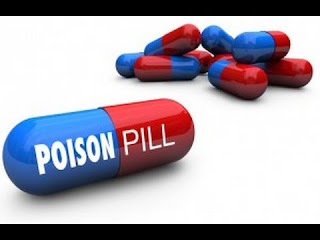 Rory Stewart says that tbe Tory party is going througb an undemocratic period in its history. He states a poison pill lays at its heart.As the purge delivered by text strikes the Tory party we see the best of Stalinism and authoritarianism transforms them into the Brexit Party. We now clearly see that a significant proportion of leavers oppose the closing of Parliament. The issue is now far more than remain or leave and an opportunity arises to create a new progressive coalition for the Labour Party. In a You Gov poll yesterday we see Labour rise by 3% and the Lib Dems fall 5% to 15%. You Gov polls are never favourable to Labour and therefore this is very significant. We near a process by which Labour becomes the clear choice to stop the Tories.


Johnson uses accusations Junta like behaviour. Yet ironically these are his methods. Like many; immature and with no self awareness he slips into projection and displacement. It's time to allow him the humiliation of public distain. Let him twist in the wind as the Brexit Party threatens the purged remnants of the party of the Great Leader. The Conservative party is undergoi g a greater crisis than it did during the period of the abolition of the Corn Laws.

We know how though that a hard right, populist and English Nationalist tendency is willing to do anything to give it's agenda authority and power. The street gangs of the EDL and DFLA are with this tendency and will support them. A hard right/ far right new party is about to be born out of the remnants and still birth of the Johnson administration. I listen to the stupid equivalence argument of Jo Swinson and feel like wretching. Centrists can not defeat the far right it can only come from the left. The culture wars intensify and there is no muddle/middle ground . There is no moderate position on poverty/ inequality or on racism or fascism. We approach a desperate decision...as Johnson loses control of Parliament and as his lies and deceptions are revealed we discover the slouching creature that he has become..it's time now..the nasty party is back and as fire becomes it's play thing I fear that many innocents will be consumed in a new burning times. There are many witch finders and stassi like informers out there and they are looking for victims ...

As the Tories lose their majority and another Tory joins them. We begin to see the inverse of the 1980s. The adding of Tories official and unofficial moves them distinctly to the right. As the Labour Party becomes more and more as it was meant to be. The Lib Dems become more market obsessed and more right wing. We live in strange times...in the 19th Century Liberals began to join the Conservative Party. In the 21rst Century Conservatives begin to join the Liberals ...Swinson is creating a new right wing party. It's socialism or Barbarism....
Posted by Any Human Heart at 12:02