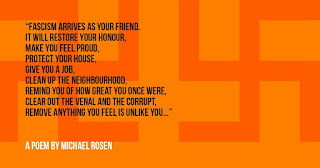 And the days come down to this. The fall begins and the election nears. Justine Greening on Radio 4 suggests that the Tory Party needs time in opposition . Now there is no middle ground you have to choose this is the time of choice...

It's time now as the government falls. The Tory Party becomes the Brexit Party as the purge continues. Now we must decide . Where we go next depends on so many issues and concerns. It's time for the election . It's time to step out and stand up. When dictatorship is a fact , revolt becomes a duty. Now is the time...

I read the cruel, mocking, unfeeling comments on the Pembrokeshire Herald Facebook page and how they lap up the suspension of parliament. Threats of violence towards "remainers". Is this how we are defined in modern Britain? In a neat Remainer or Brexiteer box? Not as neighbours, friends, customers, work colleagues. This mighr be keyboard bravery but how long before it shifts from behind the keyboard to actual face to face


"I sometimes fear that people think that fascism arrives in fancy dress worn by grotesques and monsters as played out in endless re-runs of the Nazis. Fascism arrives as your friend. It will restore your honour, make you feel proud, protect your house, give you a job, clean up the neighbourhood, remind you of how great you once were, clear out the venal and the corrupt, remove anything you feel is unlike you." - Michael Rosen


And so as Boris Johnson begins his conjuration. From his dank book of dark magic he conjuress a people versus politicians discourse for Halloween. Elsewhere the tectonic plates of the UK begin to move apart. A border poll beckons from Northern Ireland as an SNP supported Labour government nears. Will the Greens and Plaid go along too? Or will they stick with their bland friends the Fib Dems? The SNP realise the truth of the situation. Will the others? there's the rub. Soon Ireland will be gone and then Scotland. Will we in Wales be the last colony of the state of Johnsonia? . As the forces collide in a vast Hegelian dialectic...what synthesis will emerge.? Where will little Jo Swindleson be then? The questions emerge the answers are awaited . It depends on so many variables, so many incantations and so many interpretations. The paradigms are mutually impenetrable to one another. The words and grammar clash and the unknowable and unreachable Brexit becomes meaningless as the dark forces released by the Sorcerors apprentice Johnson reads from the book of Bannon and all is laid waste as the images and ghosts of authoritarianism walk the land. This is a truly horrific Samhain and we must ask who it's victors and vanquished will be? Who is the night king and who the undead? It's far from clear.... 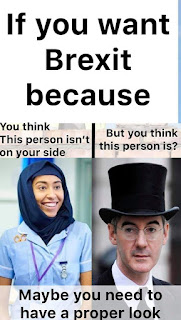 There will be an election soon. All possibilities are there . When will we realise that in the final analysis the centrists will always look to the right both consciously and Unconsciouly. A November 1 election on all Saints Day will reveal that all Saints have a past and all sinners a future. But who is saint and who sinner and who will win Ragnarok? And whose image will come to form the world to come? Nothing is clear or certain.. and who will be cast into the lake of fire? I was not born for an age like this. Or was I? Only time will tell...I chat to Graham Mallaghan and he ironically points out that he would not blame the young for introducing a Logan's Run approach for the over 30s. Perhaps he has a point....I smile and the X6 bus speeds towards Swansea....


His last reference was to call for the boys to come to my workplace to have a word with me. Like Saurons one ring the closeness to the far right corrupts and destroys those near it. From moderate to ringwaith is easy then and many have passed that way.. and many will again. The Far right devours it's children and they become monsters of intolerance and bullies.. the SA call them from the abyss and pied piper like you can detect them by the stench of 1933.


Yes I know you're right
I see it in your fierce eyes
But me I've never thought straight
Since the day I had the first doubt
Yes I know you're right
And I'll back you to a point pal
But I'll never be constrained
By another man's ideas now
I spent too long on this road
Looking for the answers
But Poverty and Failure
Aren't what I'm after
I painted "Fight" on factories
But they closed the factory down pal
I want to find out where the Heart's gone
Find out where the nerves gone
What do you do/
When democracy fails you
What do you do?
Posted by Any Human Heart at 12:15