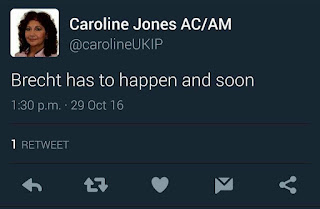 An alternative late  October 2018.... As John Macdonnell MP picked himself up from his fall on the way back back home, he reflected on what might have been. If only, he reflected that we had had one more nomination we could have managed a significant challenge to the new Blairite leadership. He thought of the opinion polls. Labour and the Conservatives were bumping along in the polls at 22% and 21% respectively. David Cameron's government was in crisis. UkIP had won three by elections in a row and the Greens standing at 26% in the polls had developed a membership of 250,000 and a youth movement Green Moment had over 40,000 members. Caroline Lucas had handed over the Leadership to Molly Scott Cato the MP for Bristol West .

The rise of UKIP had led to anti EU riots and with the Far Right and six former Tory MPs defecting to them were contributing to a crisis of democracy. Frank Field, Liz Kendall and Stephen Kinnock had supported the Cameron government in a crucial vote of confidence. The Cameron Government was staggering on supported by the DUP on the basis of financial  guarantees
Macdonnell, Corbyn and others of the left were attending a conference the following day it was entitled "Where next for Socialism?" Within the Green Party the pressure was building to rename the party "The Green Left"

I love the speculation of what if's?. All I have done is to transpose the German political conditions to the UK. Without the EU referendum this alternative history may well have been valid. Yet on the day before Samhain I ask myself the question which version of history would I prefer? I come down clearly on the one I exist in and experience as the bus climbs through Godre-Graig. I conclude there would have been no chance of a real Socialist Party without the Referendum. I ask myself what would I feel to be still in the EU and yet still living under a Cameron government. AND I know what I would prefer...

Yesterday's budget showed that the Tory Party is applying a thin tinge of Labour lite policies. Just as the Callaghan government of the late 70s began Thatcher lite monetarism. We stand on the edge of a Gramscian hegemonic shift. History often has echoes of the past and we can discover much from reflection. Yet I know which version I prefer...and it's not the one without a Referendum.
I grow weary of the centrism of the Peoples Vote campaign. There are many worthy people within it and many friends too. Yet within it too are many who created the policies that caused the crash of 2008. The market policies of the Blair government with it's PFI's and it's love of entrepreneurs like Lord Sugar and Philip Green led to and contributed to Brexit and the financial crisis of a decade ago. I am afraid that many of them begat the populist right and contributed to the causes of Brexit. Oh the unforseen consequence of  Weberian events.! Perhaps the sliding doors of alternative histories should be often considered...for the want of nail .. and all that?

Irony is often useful here.. do we need Brecht, Kafka or Camus? I just don't know..do you?
Posted by Any Human Heart at 12:57