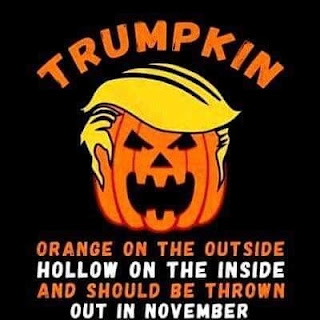 I am the old left wing Pagan at Samhaun...I feel the chill in the air. As I walk from the Clinic to Swansea Bus Station I feel that Winter is coming. I know that as the Moon turns full we stand on the edge of the Hunter's Moon. But I ask who is Hunter and who is Hunted ? We stand on the edge of the liminal door to Winter. Within all of us we question the effect psychologically and practically of the shift back of the hour. My thoughts turn once more to the full moon at it's apogee in the next few hours. I feel within an unease, a kernel of worry and yet a sensation of calmness surrounds me. I glance around and think more deeply of the coming winter. We stand close to Samhain the veil between the worlds are thin. Whom does the Crone expose and mock now? And whose ghosts walk in the dusk?

We near the Midterms in the USA and I ask is this the last election before fascism comes to America?. Does the malicious Trumpkin in the growing dark hunt the foolish centrist Democratic party?. Will it take the hunting by the Trumpkin to create a sturdier socialist alternative? Or is he the hunted as the rust states awaken to his delusions.? Do they know that the billionaire alligators he has introduced into the swamp will consume them? Or are the bland Democrats so insipid that nothing they say or do will wake the trailer folk from their illusions? Will the inanity of their centrism fail and the Ur Fascism of the theocratic right triumph? I just cannot tell as I trawl the net for information. I just don't know. In my class this morning Izzy pointed out to us, the blond Aryan looking young men unaware of history speak the language of Weimar and of the SA. Their words are simplistic and direct. 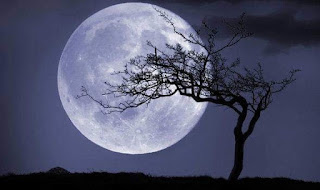 In Brazil the Far Right nears power. Words spoken celebrate the former military regime. And I realise that just as the rise of the Evangelicals brought Reagan to power in 1980 that they will bring a more viscious para military regime to power. In Hungary will we see the first University driven away from an EU state. Are the ghosts of the far right channelling the Iron Guard? As the AFD walk the German state ..does the ghost of an Austrian artist haunt the site of a bunker within Berlin?
As Lord Hain names Philip Green as a sexual predator and user of racist language..the confusion of Hunter and hunted back.es more dependent upon hidden agendas and lens.
And yet as the darkness grows so grows other things. Corbyn grows more effective daily as he exposes the Tories more quickly and more cleverly. Universal Credit is exposed more and more. As the pipe bombs drop through more American letter boxes the true nature of the Trumpkins followers are exposed.. More and more we see those he empowers and promotes.

The powerful men exposed by the #MeToo movement are found to be the alligators of Trumps swamp. These are gross men, these are the hollow men. As the dark and the light emerge as Samhain nears I realise how little I can see the road ahead. The path is unknown, that a are no road signs. This is the time of the trickster, this us the time of Loki and Set, yet it is also the time of Horus and Baldur back from the shadow lands. Who is the trickster? Who discovers the illusions?, the fake news creators? And who asks the real questions and who are the real questioners? I can't tell and my mood is varied and complex. Has the old dark lady caught me on the dark side of the moon? Or have I isolated and exposed the dark deep right and made them vulnerable to exposure? I cannot tell... yet I know the air is different And the world is changing. Are these the 1930s reborn? Or are we at last waking up? In Hessan the SPD and CDU bleed support but are the fires of Autumn lighting the Reichstag or are they the beacons of hope? I am in an odd mood as the bus moves through the growing dark of Morriston .

Does the appointment of Philip Green as advisor by both David Cameron and Tony Blair say more about them than him? Are these the true nature of the captain's of industry making clear how power corrupts all it touches. To whom does this put up to scrutiny and to whom does it obscure? As we move on to Cktdach the darkness grows but my heart lightens. This is the Yin and the Yang, this is the time of the shadow and the shade, of the child of light and of the Celtic new year. As Shelley pointed out that beyond Winter comes a new Spring. As Trump lashes out new radicals, left wingers and reformers grow in numbers but below the surface the Nidhog of Ur -Fascism gnaws at our hearts and souls.. there is much to do and much hope to shine on those darker places. And I smile I am the old Pagan at Samhain and I see you Trumpkin and your foul ilk. I see you and your dark soul. And the light shines upon you....where there is fear there is power...Samhain comes..I left this morning in the dark and return in the dark yet the light grows..
Posted by Any Human Heart at 11:56