I found this last night on my timeline. So i thought i should share with you all the research contact shave sent me.

Carl Vickers So what make is facist we stand against all types of grooming pedophilles extremists jaihids we want a safer future for our children all we are asking for is tougher laws so Mr Shrewsbury will you be willing to come chat talk with myself and other committee members and find out what we are about we have already had a grooming place turned over by the police and been out helping the homeless Mr loyd had not been threatened where is your eveidence to back up your claims? I'll have you know we have fed and helped many forgien people we had alot of mixed race people marching anyone reading this please do your own research so once again I ask would you like to meet and have a discussion on the matter of calling us facist etc or will you the same as Mr loyd now block and delete my comments p.s we only had out chicken and tomato soup and bread on our food run would you also like to come out one evening and help out and actually see what we do 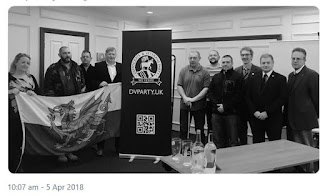 When not linking up with other neo fascists across the UK Messrs Stephen 'Reeco' Rees, Carl Vickers and their motley Swansea DFLA entourage are plotting their path to power via another far right front - The Democrats and Veterans party, or Donkeys and Veterans party as it's also known (all will be explained). Not to be confused of course with another far right front the Peoples and Veterans Party (yes this is getting like the famous scene in the brilliant Monty Python movie The Life of Brian).

The Democrats & Veterans were launched earlier this year by the failed UKIP leadership candidate John Rees Evans. When Rees Evans failed twice to become kipper leader he did what far right failures traditionally do - formed his own party! Odd he should plump for a party name with the word 'veterans' in it however given he failed to make the grade during a very brief stint with the parachute regiment. A failure as a soldier and a failure as a candidate Rees Evans only claim to 'fame' came in 2014 after he hit the headlines as the result of a bizarre claim that a 'homosexual Donkey' tried to rape his horse. https://www.independent.co.uk/…/ukip-candidate-gay-donkey-t…

Being a disillusioned former kipper himself - apparently they were too 'soft' on immigration and law and order for his austere prussian tastes - Stephen 'Reeco' Rees was doubtless impressed by Rees Evans zero tolerance approach to the issue of equine homosexuality and promptly joined the Democrats & Veterans. And he launched a local battalion of the D&Vs at Swansea's Mercure Hotel in April (and where the far right party holds its meetings on the first Thursday of each month). Meetings that are presumably staged in an average sized lift to judge by the meagre numbers at their April launch (see B &W pic below). 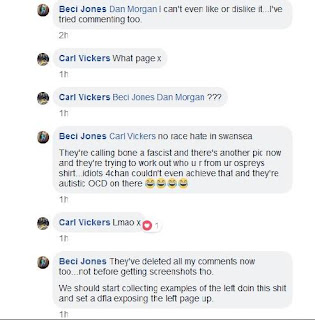 While to judge by feverish discussions taking place on Carl Vickers fb page last night following our piece yesterday - the far right don't react well to public scrutiny - it's clear that Vickers lying doesn't just extend to denying the DFLA's racism and links to fascists groups. Hence his barefaced lie to cronies fearing exposure as far right racists that his facebook page is Private (see screenshots). Afraid we have some rather bad news for the likes of Beci Jones - Vickers profile certainly aint private https://www.facebook.com/carl.vickers.96 and grateful for that we and other welsh anti fascists are too. No question Vickers facebook page has been a valuable source of information on the far right and their fellow travellers in Wales for some time now. So much so that suspicious minds might be given to wondering if Carl Vickers is all that he seems? Tomorrow night's 'secret' meeting of the Swansea DFLA looks set to be a eventful affair 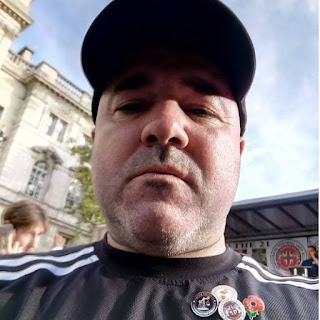 The names Stephen 'Reeco' Rees and Carl Vickers will be familiar to readers of this page - a little while ago we highlighted their role in trying to stage a clandestine meeting in Swansea with leader of the Far Right For Britain party Anne Marie Waters. We also covered their role as local organisers of the neo fascist so called 'Democratic Football Lads Alliance'.So it wont come as a surprise to readers to learn that last week Rees and Vickers were begging their cerebrally challenged followers to join them on the DFLA's 'historic' March on Pall Mall on Saturday - historic only in the sense it turned out to be a historic failure that is (Mussolini's blackshirts March on Rome it certainly wasn't) And If you've got some time on your hands you can relive the 'highlights of the Swansea DFLA contingent's day courtesy of one of Reeco's cronies, who kindly uploaded it to facebook for us to all enjoy

While events took a more sinister turn yesterday when Carl Vickers took exception to photos of his Pall Mall cameo being shared on social media - in particular urging his 'crew' to visit the facebook page of a Swansea labour councillor and let their 'views' on the matter be known.
But as a visit to Carl Vickers page will show https://www.facebook.com/carl.vickers.96 some of the shower he hangs out with were seemingly intent on making any such 'visit' more personal

:( (btw we've got the screenshots before you try and delete the post Carl)
And to cap a truly disastrous week for Reeco - the erswhile football 'Coach' has quit his role as a scout with Swansea City on account of his extremist activities - we've been reliably informed his efforts to forge an alliance with some of the 'lads' among the support of rival club Cardif City proved a dismal failure.There is by all accounts a strong anti fascist element among the bluebirds faithful and they want nothing to do with far right toerags like Rees.
And we couldn't round this post off without uploading the photo which caused Carl Vickers so much angst (he's the one holding the banner bottom right) Not a great view admittedly so we've included another pic of Portmead's finest - oh and a screenshot of the charming exchange about paying a local labour councillor a visit. And because we didn't want poor Reeco feeling left out we've rounded things off with a photo of him too (because we're nice like that 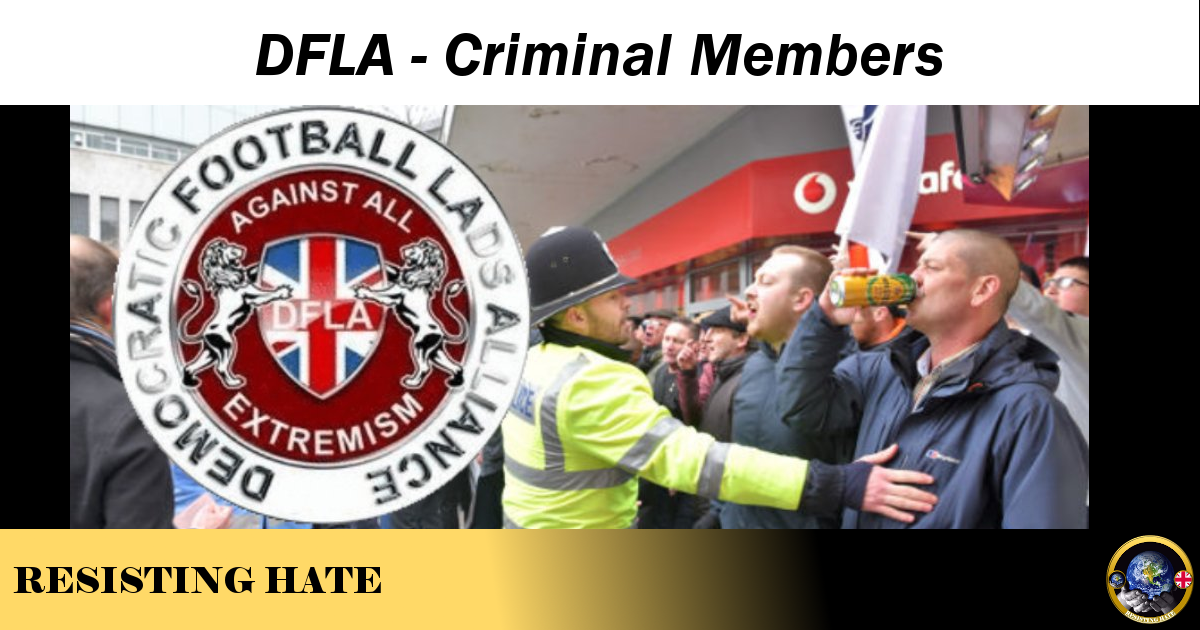 Initially the group billed themselves as an anti terrorism protest group with no affiliation to hard right or hard left politics.
However the agenda of the group soon became associated with anti Islam marches and Islamophobia.

As with most far right organisations the FLA fell foul of the usual infighting within a year, partly as a result of financial irregularities, with leader John Meighan allegedly taking all the money from merchandise sales. The group split into the FLA and the DFLA (Democratic Football Lads Alliance.). This is their Facebook page.
The split led to a fractured approach with the FLA following Meighan and the DFLA dissatisfied with his leadership and forming a splinter organisation. Bizarrely this led to a situation with both groups attending protests and marches under separate umbrellas with separate organisation and leadership.
At Resisting Hate we are interested to see just how many members of the DFLA have a criminal conviction and a violent past. For a self promoted peaceful organisation this bunch of thugs, yobs and ruffians show exactly the kind of person who is attracted to the street brawling antics of the DFLA.


Criminals of the DFLA 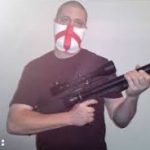 Mark is Ex BNP and EDL. He was arrested for violent disorder and banned from EDL protests as part of his bail conditions. Mark also teamed up with Neo Nazis for a ‘Stuff the Jubilee’ party/protest.
Paul Martin (Leader of Leicester DFLA) 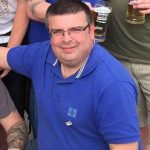 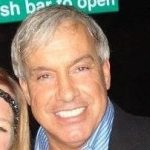 Simon received a sentence of eight months in 2011 after inciting violence at a 2009 football match. He was also banned from Tottenham games for 6 years and from travelling abroad to matches. He may also be the same Simon Howlett charged with cocaine smuggling in 2004 after half a tonne of cocaine was found in a shipment of coconuts.
Jon Roe (Millwall/Rangers DFLA) 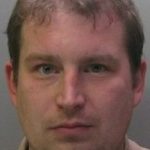 in 2016 Jon was jailed for eight months after pleading guilty to affray, and received an 8 year Football Banning Order, which is still in force.
Harry Childs (QPR DFLA) 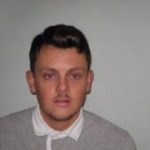 Harry was sentenced to 8 months in prison for violent disorder and given a 6 year banning order.
Karl Court (Aston Villa DFLA) 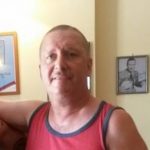 In 2005 Karl was sentenced for fighting at a football march. He was banned from all matches for 5 years. Despite this he kept his position as General Secretary of the charity Aston Villa Former Players Association. 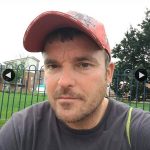 Martin was sentenced to eight months imprisonment for kicking a man who had already fallen to the ground.
Darren Brindley (EDL, Newcastle DFLA) 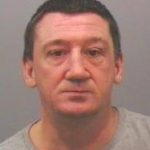 Darren has a record of violence. He was jailed for 26 months for affray and breaching a suspended sentence and was also given a Football Banning Order.
Bryan Heron (Newcastle DFLA) 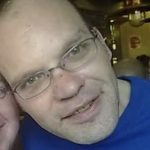 Bryan was given a 52 week jail sentence, suspended for 2 years, for violent disorder, along with a curfew order.
Greg Buchanan (DFLA Rangers) 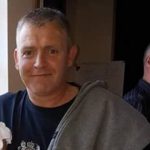 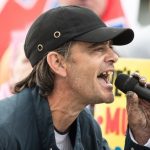 Ian threatened and then was humiliated by Muslim lady. He’s also quoted in 2015 as saying


We should send them back to the sandpit they all came from, and then turn that sandpit into glass 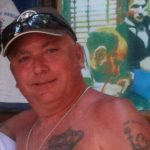 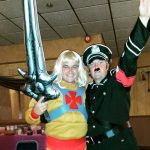 No criminal record found for Emsie but he likes to dress as a Nazi and visit Auschwitz.
Roy Price (West Ham DFLA) 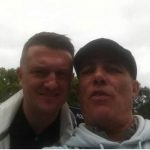