Of Cocaine and Capitalism 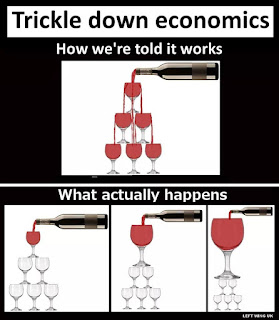 Of Cocaine and Capitalism...Radio 4 discusses Cocaine addiction in society. Sajij Javid comes out with the same platitudes ..punishent and jail. Simplistic and bland. Of course the only way for people to realise what they do is to consider their own behaviour and it's impact on others. Tuned up and full of Coke the individual realises very little of the damage to themselves. Cocaine is the capitalism of individualism. It allows denial.and projection it adds to the false self and makes it's addicts believe that they control it, rather than it controls them. How apt that the Tories are seduced by simple solutions to both cocaine and capitalism...drugs that destroy through illusion and denial.


As we prepare for the speech of the Maybot we see a Tory conference that has run out of the cocaine of power and the understanding of its addictions. This is the morning after the binge of austerity. It is a confetence after the coke illusion has worn off and the depression has kicked in. Fear is no longer kept at bay and the reality begins to dawn. These are the last days and all words that do not discuss the addiction to lower is meaningless. The European Research Group call for more cocaine to fuel a new orgy of the continuing Thatcherite revolution and the public services and we all risk the slashing knives of the drug fueled hard right wingers of the Tory street gang...high on Brexit fantasies and fueled by trickle down economics. Only the the therapy of Doctor Corbyn stands between us and the knives and street violence of the blue kipper gang and their fantasies and desires..these are the hard "working" gangsters who rule over us.

I watch the arrogant young Tories, I watch the cruel features of the plutocrats and vile supporters. The truncated awareness of its delegates and I see the sharp points that the pupils of their eyes have shrunk to. These are the addicts; these are those who hang on to power and still they fail to know, understand or appreciate what they do to others . The ghosts of Callaghan and the late 70s are everywhere..yet the delegates deny the phantoms and their own physical and psychological exhaustion.

Similarly high on delusion the DUP smoke the crack cocaine of unionism. It is laced with sixteenth century Calvinism as they live an illusion that Northern Ireland has anything in common with the UK. This is a government high on its drugs of choice and we are its victims as Boris Johnson's capitalist filled veins throb with his drug of choice and throughout his speech as his acolytes addicted rise in adoration to their Messiah..
Posted by Any Human Heart at 12:36