The coming of ethnic multi vocalism........farewell you kippers..... 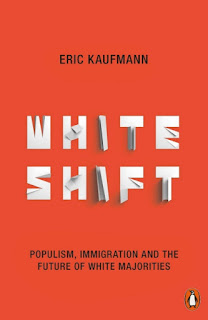 Of joining and melting together celebrating as we grow...I have been reading a fascinating book by Eric Kaufman it deals with the ethnic mix that us happening. He points out that now 50% of the American population is now of multi racial origin and that by 2050 it will be 75% The days of the WASP are comi g to an end and Trumps victory an aberration. Kaufman argues that by 2100 the UK will be at a level where 50% will be multi ethnic. He argues that a white identity has chosen four possible responses. We see that the first is to fight against this trend . We could call this the response of Farage of Marine Lepen and the crypto fascists of Eastern Europe. Its spoken by Jac O" the North and in Ein Gwlad There is a curious confusion here between race and so called 'British values: it's often most revealed in the ignorant ranting of Tommy Robinson and of the Trumpeteers of the Rust Belt.

The second response is that of flight. Here we see a growing white shift to the suburbs. It's often maintained in this way in the Midlands and beyond the experience and culture of London. We can easily see how relatively weak the UKIP vote has always been there. In areas like Neath and other parts of Wales there is a fear of losing white racial dominance often justified in odd ways. You often find the fear the greatest here amongst those who know virtually no one of other ethnicities. Or very little of the true nature of the Abrahamic common root of Judaism, Islam and Christianity. With it will come an identity that us overwhelmingly unaware of history and any criticism of "British hustory" will be seen as being unpatriotic and un British. Ontological insecurity is often too detected here.

A third group will seek denial of the process. They will be in a privatised role and perhaps not comprehend or notice the change. They will be apolitical as distinguished from the non political " right wing claims" of those stuck in the fight or flight categories of ontological insecurity.
The final response is to "join" the process of multi culturalism and ethnic background. This is predominantly seen on the left and in cities like London. In groups like momentum and in the anti÷capitalist movements. It exists in multi national movements and in other organisations of change and challenge. Kaufman argues for the concept of multivocalism ... that of many voices from many backgrounds with many experiences and many histories.

I find myself clearly in that group. I have a Welsh voice that celebrates the Mabinogion and it's culture. I am Irish in that I am commited to a united Ireland and consider myself commuted to both Irish and Welsh Republicanism. I am Jewish and anti Zionist. I take from here the voices of Marx and Freud and the Jewish experience of seeing the unspoken truth of prejudice that only the outsider sees. I love Shakespeare and Milton and the rich English of the King James Bible . Yet I loath the monarchy, the ignorance of private education and the narrowness of the white flighters and the white fighters ignorant of history and reality. I have many voices they are all different and I celebrate the joining that both I and my descendants are experiencing and will experience.

The Tommy Robinson of the perfect teeth and the showroom Zenussi Kitchen is a fake creation an England that never was, will never be or could ever be true We have been multi ethnic and multi vocal for 20, 000 years. Cheddar man was dark skinned and blue eyes. It's always been that way it always will be..There is a song from the early seventies in many ways it's trite with silly, racist and crass dated language ..yet it contains a truth that Kaufman writes about nearly fifty years later. It talks of it " really not mattering which religion you choose" and of the melting pot that Blue Mink sings about. It seems that when the melting pot has been turning for a hundred years or more and the mix created is multi vocal with multi languages of many faiths, philosophies and of non. I am glad to join with this process and I am Immensely confident in both my ontology and epistemology. I know who I am and celebrate what I know. Yet I know that each one is ever becoming and growing in endless ways.. the citizens of the future will love King Arthur, Shakespeare, Rumi Ibn Khalldun, Maimonides and Marx. Let's celebrate the mutual joining, enriching and sharing..Let's us celebrate our identities and selveswithout the narcissism of the Indentitarians or the pure insecurities of the bluekippers and the hatted of the borg like clones of the Football Lads Alliance and of the EDL. Let's us join ourselves in the dance of history and learn from one another in the great dance of discovery and celebration.