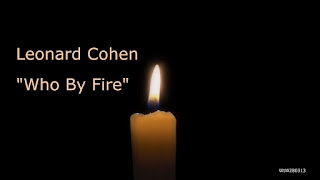 The bus journey was smooth as I headed for Swansea this morning. Then as we reached Swansea the tail back began. it took over 40 minutes to reach the Quandrant. as the bus turned to the Quadrant  I noticed a pilie of clothing on the road. There were police and ambulances everywhere.  The traffic was overwkelming in Swansea. what had happened. for me and my fellow travellers it was another daybut for someone else....And who shall I say is calling? Who indeed in the sunshine?
Who By Fire
Leonard Cohen
And who by fire, who by water,
Who in the sunshine, who in the night time,
Who by high ordeal, who by common trial,
Who in your merry merry month of may,
Who by very slow decay,
And who shall I say is calling?
And who in her lonely slip, who by barbiturate,
Who in these realms of love, who by something blunt,
And who by avalanche, who by powder,
Who for his greed, who for his hunger,
And who shall I say is calling?
Posted by Any Human Heart at 16:38