The Liberation of Leanne Wood and the stings and arrows of Alt Right Jac..

I notice that now liberated from the leadership of Plaid Leanne Wood has returned to her roots. She describes herself once more as a Welsh Republican Socialist. That's to be welcomed ..it's often a truism that when Socialists are elected to lead Social Democratic parties they are often imprisoned by the entrenched "moderates". Unlike Corbyn Leanne Wood had no Momentum like organisation to reform the party. Leanne is a street fighter who understands the issue that it is policies that count and not personalities. However my Dire Wolves and little birds tell me that the Left in Plaid are organising and will push for a resistance to the drift to the right. It was interesting how Leanne in her interview this week pointed out that Adam Price had effectively written the last two Plaid manifestos. It's also interesting that Adam Price has created massive expectations for progress. I suspect that many non left wingers who supported his campaign may well reflect upon this. I cannot really see how things will be any different in the run up till 2021. The Left in Wales is now spread between Momentum and the Eco Socialist wing of Plaid.

The defection of Gren Ham to Plaid is very significant and it's very interesting to see what happens next. The bitter old broflakes of Jacs right wing lackeys are already upsetting about this matter. Anne Greagsby is frothing at the mouth at this defection. Of course the Greens in Wales have brought this on themselves and I could see little other option for him. I only hope for Gren's sake he deals only with the Ecosocialists within Plaid. This is the second time it has happened when a Green Party leader has defected to Plaid. I only hope that in Gren's case that he meets others than the Caradog Evans archetypes his predecessor met.

I noticed earlier this week that my blog figures are dramatically rising in numbers. Then my premier Dire Wolf told me that young Royston Jones has blessed me with an article pointing out that Corbynistas like me illustrate what is wrong with Wales. His demented supporters seek to exorcise me and others like me from Wales. They demand and rage that Adam should expel from Plaid lefties, greenies, trans activists and feminists. I wonder if Adam Price realises just who has been supporting him. So I will say to Jac o the Deep South. Keep it up Jac ..boost my ratings. Old right wing bigots like you would have to be invented if you did not really exist. My ancestors are Welsh, Irish and Jewish . Yes you are right I have an English accent but that's because of an English Prep School. I am a Welsh Republican Socialist who belongs to Labour and to Momentum. . The only difference between you and Farage is that Farage knows no Welsh. I loathed the comedy and farce of Prince Carlo in 1969. I loath the coming farce of 2019..My son is Morgan Rhys and I have lived here since I was 16. I did my A levels Jac at Dynevor Comprehensive in Swansea...are you you going to bud a wall Jac? I know you love Steve Bannon but this is ridiculous.. I understand why a member of Ein Gwlad called you a Dinosaur.. it's clear to everybody. 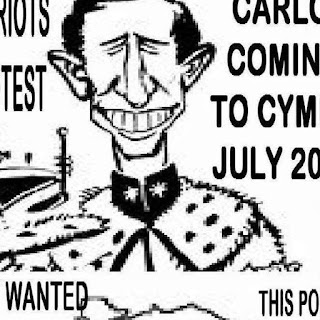 You could watch the French Film "La Cage Au Folles" a satirical film, Royston. The Mayor in that film reminds me of you. I wonder if the Sue who so often comments on your blog enjoys playing the Organ in a Chapel not far from Swansea . After all you must have some relaxation between Council meeting. Eh Sue? Oh and Jac what Cambrian founders like you have security experience and skill that could inform you? I could not possibly tell..

As Welsh Labour moves to the left and the length of time of Neil McEvoy and Anne Greagsby's exclusion from Plaid lessens and shrinks ..much will be revealed. As Leanne Wood embraces liberation so many truths will be revealed as all the poisons that are in the mud hatch out... Spot on Robert Graves, spot on...
Posted by Any Human Heart at 12:31