Catalonia Wales and the Left

Thoughts on Catalonia, Wales and the Left 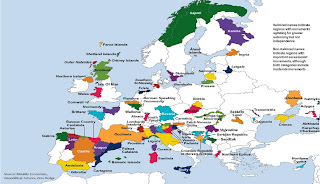 Catalonia should make us all think about the nature of the nation state. Some on the left will find it difficult to distinguish nationalism from the issue of subsidiarity and the devolution of power to the lowest possible level. The nation state as it stands is tied up with the nature of power, class and capitalism. As we see a decline in the Nation State throughout Europe we should instead see this as a challenge to the nature of power. The standard kipper argument on sovereignty misses this point as it fails to understand class power and structure and many on the left confuse events like the Welsh, Scottish and Catalonian issue as the same. It's all very well to argue for internationalism using the assumptions, language and culture of the dominant discourse of the British state to promote it. It was English capitalists and others who oppressed and exploited workers in Wales and in other parts of the world. English assumptions and attitudes often brings a colonial aura that few including myself see or are aware of. The Brit Left often forgets this and while it's aims are worthy and noble often it's failure to distinguish Right Wing nationalism from the desire for an independent Wales or Catalonia.

Gareth Hanford will point out that from his view that's why he voted to leave the EU and argue I am being inconsistent. However I argue that there is no contrafictions here. It is precisely that through a Europe of the region's that an independent Wales or Catalonia could resist effectively global

capitalism. The Spanish nation state has pulled women by their hair from polling station, beaten people and behaved like a Fascist from the time of Franco. Article 7 of the European Union makes interesting reading and I am yet to witness the EU commission behaving to UK citizens as the Spanish Paramilitary police did to the people of Catalonia. Orgreave and Catalonia have uncomfortable parallels and the Spanish state edges towards a crisis. Those on the left have much to reflect upon and the emergence of a mass left party is often not served welk by it's supporters. The Welsh Labour Parties silence on Caledonian helps no one . Donald Trump and Erdogan of Turkey both opposed the referendum...one must ask why and look deep within. There is no contradiction between supporting an independent Wales, an independent Catalonia and being an internationalist and a socialist....the Brit Left should grasp this and reflect upon the role of some of them over Lexit....they really should
Posted by Any Human Heart at 10:54