Storm Ophelia and the Psyche...Metaphor or synchronicity ?

It's the day after storm Ophelia.. It was an odd day yesterday. The deep orange Sun gave an alien feel to the world and the darkness of yesterday morning was reflected in both my mood and the mood of my clients. It has always fascinated me how an outer event completely unconnected can have a constellated effect on our respective psyches.Jung called it synchronicity and it certainly was an observable phenomena . I heard of a television interview with John Redwood . He was filmed against an orange red sky and a covered up Big Ben. Truly,did the Vulcan appear that he is seemed to be at home in this alien world. The radio was full of stories of cancer, death and international turmoil. In fact an apocalyptic tinge could be detected everywhere 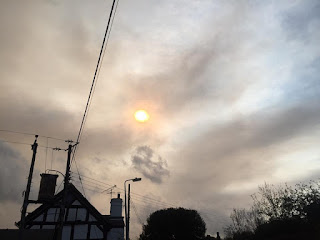 Storm Ophelia hits Swansea perhaps it's a metaphor or even a metonomy? . Does it stand for the coming economic storm as we edge ever closer to the Brexit edge of the cliff. The winds and greed of WTO tariffs batter us and the roof of Swansea by s station sounds not so save. The wind howled and pursued me through the Sandfields as I head home. Today the sky was cloudy and it seemed so very dark till at least 9 this morning. The Trump alligators are swimming the Atlantic disguised as multinationals and threaten to come ashore. A Tory cabinet minister tells us to dig for Brexit and urges us to grow more food. This is the spirit of Dunkirk and the blitz aimed at Phillip Hammocds enemies within Europe. Welcome to the nightmare of free trade agreements. Welcome to the world of Trumps ego and the unstable world of authoritarian sensibilities..as some rough beast slouches it's way to the Bethlehem of getting our country back....the dust from the Sahara colours the sky and the redness of the sky alarms and whispers dark brooding things...winter is coming....
Posted by Any Human Heart at 12:23