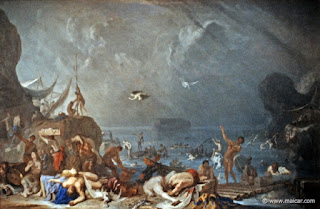 (Read the article on one page)
Deucalion was the son of the last Titan (god), Prometheus. According to Hesiod, Prometheus and the god Zeus were in conflict. Prometheus was the one who, with the help of the Goddess Athena, created man. When mankind became mean, greedy, and disobedient to the gods, Zeus decided to destroy them.

Deucalion, son of Prometheus, in an effort to control the animal instincts of mankind asked Zeus to be merciful. Yet Zeus had already decided to destroy the corrupted generation of mankind. Only Deucalion and his wife Pyrrha were saved—both of whom were considered of the ranks of the gods, the most righteous amongst men—when Deucalion took advice from his father, Prometheus, and constructed an ark. He and his wife used the ark to escape the flood sent by Zeus. The rain and thunders lasted for nine days and nine nights, and the land was flooded, drowning the generation of men except for a few who were saved by running on the top of the mountains. Once the flood was over, Deucalion and Pyrrha landed on a mount (some suggest that it was mount Parnasus) and offered sacrifices to Zeus. The myth says that once they saw the extent of the destruction, their grief was so great that the tears kept pouring from their eyes.
Their wish was to create a new mankind. Deucalion and Pyrrha prayed in many different sanctuaries for a new mankind. It was at the temple of the goddess Themis that Zeus listened to their petitions and their request was granted. The goddess told them that for a new mankind to be created, Deucalion and Pyrrha had to cover their eyes and throw the ‘bones of their mother’ behind them. What exactly the ‘bones of their mother meant’ is not clear, however the most common interpretation is that it meant stones from the earth. Each stone that Deucalion threw became a man, and each stone Pyrrha threw became a woman. This is how the new human kind—that we belong to—was created.
It is worth noting here that Deucalion and Pyrrha weren’t the only ones to survive the cataclysm, just as in the Sumerian Myths .
It is important to make a few observations:

a)     The story has several similarities with other flood myths, including the Christian and Sumerian Myths .
b)     One of the reasons that ‘gods’ were angry with the mankind was disobedience, a commonality among the various myths.
c)     The new generation of men is created in a different way than the previous one, perhaps explaining the difference in life span between the new generation and the old ones.
d)     Creating the new mankind required Deucalion and Pyrrha to close their eyes, as if they shouldn’t watch the process of creation. Is that similar to the destruction of Sodoma and Gomora when they were requested by God not to look back and see what is happening?
e)     Complete obedience to the gods resulted in benefits.
Posted by Any Human Heart at 12:12