Las Vagas and Gun control..what does it take Trump?

·
What does it take Trump,? 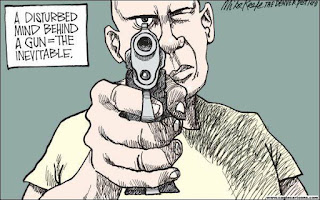 
When you don't understand that the NRA are the executioners who do not actually open fire
When more people have been shot by toddlers than terrorists and when it's white men and not brown ones that blow you away..and you don't see it then you are in denial. When you don't understand that the manufacture of guns is about profit and not freedom. When you don't understand that the second amendment is about militia and muskets and not your inadequacy you might as well have pulled the trigger yourself. When you leave the USA and cross into Canada the death by fire arms virtually vanished? What does it take Donald Trump to realise tgat the sickness haunting American society
Pulled the trigger. That the mental health of a sixty four yeast old accountant wenr unnoticed because of the myth of the great society. The truth is Donald you are the personification of the sickness. Your ego pulled the trigger. Your ramblings, ignorance and simplicity made it possible...yoy Donsald and your ilk are the the men who made the guns, made the ammunition and your greed pointed the weapons.. you are the sickness.. and the executioners....when the Governor of Nevada vetoes legislation that would limit guns because he feels it limits constitutional righrs then he might as well have pulled the trigger. When mental health us ignored, when cultural change is denied ..when the myth of the gun and the West took you in..you are the murderer and the executioners..
Posted by Any Human Heart at 11:27