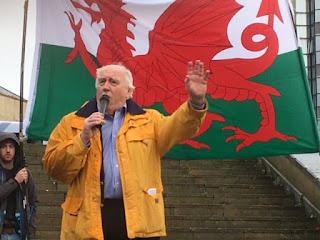 Monday October 16  12.30 to 2.30 places limited.......
The story of Welsh devolution is a convoluted tale of constitutional change driven through by a determined combination of committed politicians and activists, academics, journalists and commentators with substantial but by no means overwhelming popular support. It has not been marked by great public agitation, by marches and demonstrations, or even by intensive public engagement. Large sections of the Welsh population have remained passive and disengaged throughout. When asked to actively register their support, between half and three-quarters chose not to do so. proponents of change have managed to achieve a truly radical transformation in Welsh politics, with far-reaching consequences across many aspects of daily life for people living in Wales. The success of their campaign was grounded in a widely held view that the Welsh people deserved a better deal than the UK government based in Westminster seemed capable of delivering. Resistance to change has been sporadic and ineffective, and few strong voices have been raised in support of the status quo.


Former Secretary of State for Wales Ron Davies famously stated that devolution was ‘a process, not an event’ (Davies, 1999). His remark has been vindicated by subsequent experience, which has seen the gradual accretion of powers devolved to Wales through a series of constitutional adjustments. Davies’ comment was intended to convey that the settlement brought about by the 1997 devolution referendum in Wales, and embodied in the Government of Wales Act the following year, was not conclusive. This held out hope (for those who felt the deal had not gone far enough) that further gains were possible. It also offered some reassurance to opponents of devolution that there was still room to negotiate final terms, given that the support shown for devolution among the Welsh electorate was rather limited. In the referendum vote, fractionally over half of those voting (50.3%) were in favour, and not until the last votes were declared was it evident that devolution had been won, by a margin of 6,721 votes, on a turnout of 50.1%. In other words, while a dramatic success had been achieved for the ‘yes’ campaign, only a quarter of the Welsh population had supported it. Devolution for Wales began with a fragile kind of legitimacy.


Opponents of the first attempt to secure significant devolution, in the referendum held in 1979, played upon fears that if achieved it would result in the domination of Welsh life by minority nationalists, Welsh speakers, and/or a narrow inward-looking Welsh élite. It was also portrayed as a step on the ‘slippery slope’ towards full independence. These claims were effective in bringing about the defeat of the proposals, rejected by 80% of those who voted (on a turnout of almost 60%), with not one Welsh county voting in favour. This was a crushing blow, and left a legacy of ill-feeling, not least within the Labour Party, some of whose leading figures had campaigned strongly against official party policy which had made devolution a manifesto commitment; yet in a comparatively short period, attitudes began to reverse.


Although many believed the 1979 result had killed off the prospects of devolution for a lifetime at least, within a decade it was back on the agenda. The political landscape in Wales had changed and there were signs of a new readiness to cooperate across party lines to bring about some genuine reform. The Labour Party had suffered successive general election defeats at the UK level, and even in Wales its support had fallen significantly. Although in electoral terms the nationalist party Plaid Cymru remained a small minority, attracting fewer than 10% of Welsh votes, political and cultural nationalism was making inroads, including in the former Labour heartlands of the south Wales valleys. Meanwhile the direction of government policy, newly enthusiastic for the free market, and deeply hostile to local government and the public sector, was doing tremendous damage to the Welsh economy. Wales’s traditional industrial base was eroded, with particularly severe damage to the steel and coal industries. The gulf between the dominant political ideology of Thatcherism and the values prevalent in Wales was demonstrated during the bitter coal miners’ strike of 1984-5, when people in Wales mobilised to defend not just jobs, but whole communities whose future was seen as under threat. By 1986 unemployment in Wales had risen to 16%, 4 percentage points above the UK average. With 170,000 people out of work, Wales seemed to be heading back towards something like the depressed conditions of the 1930s.

1958 TWW, the ITV company for south Wales and the West of England starts transmission
1959 Creation of Yr Academi Gymeig (the Welsh Academy), joined by an English language section in 1968

1979 7th June: First direct elections to the European Parliament
Gwynoro Jones is the former Labour MP for Carmarthen. He began working for the Labour party in the sixties and met the significant characters of Walsh Politics from the 1960s tu 1979 and beyond. In another political incarnation Gwynoro witnessed the rise and fall of The SDP-Liberal Alliance in Wales and has much to comment on Brexit, the future and unintended consequences of the Welsh past.

This exciting course begins with the Parliament for Wales petition in 1955 and l finished with the debacle of St David's day 1979. in its ten weeks you will understand the tensions, the bitterness and the Byzantine politics of Wales both in terms of the labour party and of Plaid. It will deal with the tensions in Plaid and the fear of nationalism within the Labour party. This will be the world of the brooding dark presence of George Thomas. It will explore the tension in Plaid between Qwynfor Evans and Saunders Lewis. It will explore the political battle symbolised by the Carmarthen by election of 1966 and of the political struggle in that seat between Gwynoro Jones and Gwynoro Evans during the early 70s. We will look at the big beasts of the time, Lady Megan Lloyd George, Jim Griffiths, Jim Callaghan and the brutal and Machiavellian Ray Powell. We will look at implications, consider the what if`s ? and lay the foundation for understanding Aberfan and its effects. We will examine the 1960s in he Rhondda West and Caerphilly by-elections and speculate on the future of Wales its nationality and its identity.

The Spring term will see a another course on the history and identity of Wales as it moves into the 80s . Further into 2018 there will be additional courses on Devolution, Brexit and the rise bad fall of the Alliance. We hope to offer you a series of linked courses on the theme of Wales, nationality and identity throughout the year.

I have known Gwynoro Jones for over 30 years. He has assemble a significant archive of details, press cuttings and recollections that will explain, intrigue and shock you. Gwynoro has long supported a powerful Welsh Identity, supported a devolved and powerful Wales and is a keen supporter of the European ideal. This course is not to be missed.....