It's time for a Republic. 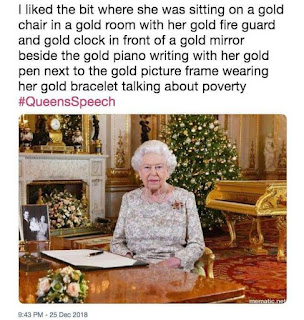 It's time for a Republic....an old woman in front of a good piano talked of poverty and told us to pursue unity she is a represntative for a long gone age. How on earth can we have a just equal society when we have an hereditary monarchy an aristocracy and the public schools? I even hear rumours of a third Welsh Investiture in July of 2019. In the year of Brexit and desperation of the Establishment to stay in power the monarchy is an institution that preserves and defends the nature of Tory power. The National anthem is a dirge and an opiate for the bluekippers amo get us. I have known it all my life I remember 1969 and the Investiture . It seemed silly to be then and full of anachronism. It contained a fantasy of nationalism and snobbery.


Yesterday I read on Port Talbot Debate and Argue that the institution of monarchy was essential for democracy, that it was cheaper than the family of an elected President and that it was better than a dictator. It's supporters were the usual suspects. They were former soldiers conditioned to the flag and the monarch. They were right wingers who claimed that republicans "we're just jealous of sucess" . It seemed that the hereditary principle passed them by. They just did not grasp the implications. When Elizabeth Saxe Coberg Gotha is gone a bare 25% will have any interest in things Royal. The Institution of the Investiture of the Prince of Wales is an illusion to keep us quiet. It was established in trickery and as propaganda for a military conquest. However in the hands of a Tory government both the monarchy and the Brexit obsessed Tory government need it to distract many from the reality of economic equality. For the Royal Wedding the homeless were cleared from the streets of Windsor. The opiate is clear and powerful so many will only be freed from it's addictive nature till the passing of this monarch.

When the Republic begins we will still have the Royal Palaces the history and the churches.. The money will still flow in and the Americans will still love an imaginary history. The monarchy has no relevance any more except in a historical context. The Republic is necessary for us to cast aside the illusions of Empire and if getting our country back. It does however have a propaganda value for a right wing discourse and a Tory government desperate to retain power. The monarchy has played a propaganda game for the last 80 years. It is promoted by a sycophantic BBC and the superstructure of the state. The military are indoctrinated by it and the Right Wing Press obscure reality and silence an alternative view...but I tell you the Republic nears and will be here soon. My republucanism comes not from jealousy not envy it comes from the desire to establish a just, equal Socialist Repblic. Compare the words of the Welsh National Anthem with the dirge that is the British one. Long live the Welsh Socialist Republic.