The Neath bu election of 1944 by Phil knight

The Neath by election of 1944: When The Trotskyists Came To Town by Phil Knight 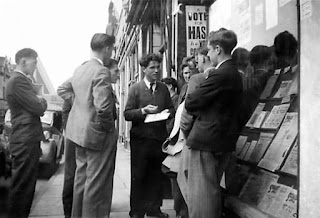 The first time a Trotskyist organisation contested a British parliamentary election was when the Revolutionary Communist Party (RCP) stood in the Neath by-election of 15 May 1945. On the 8th of December 1944 the sitting Labour MP for Neath William Jenkins died. The resulting election took place in a charged political atmosphere. The coal fields of south and West Wales where strongholds of the Communist Party (CP). After the Invision of Russia by Germany , the CP in Britain dropped its opposition to the war over night and supported the all party National Government. Arthur Horner the leader of the South Welsh Miners Federation " The Fed" now did everything in his power to keep the industrial truce , this had important effects as John Davis in his book 'Wales : A History" explained;
"After June 1941, the Communists did their utmost to support the war effort. Men like Horner stove to ensure the highest level of production in factories and pits, and condemned any suggestion of unofficial strikes. Thus a vacuum was created on the left, a vacuum which the Trotskyists, who continued to believe in the theory of an imperialist war, sought to fill."
This lead some workers to the view that the CP had given up on them, in March 1944 the coal fields in Wales, Yorkshire, Lancashire, Staffordshire, Durham and Scotland were hit by unofficial strikes over wages. Over a 100,000 workers where on strike in Wales, after a few days the government gave into their demands. A small number of Trotskyists had big input into these events. Four members of the RCP, Jock Haston, Heaton Lee, and Roy Tearse were arrested for disrupting the economy during war time. Their were sentenced to 12 months in prison. However they were freed on appeal after a campaign that include Nye Bevan.

The Neath Branch of the "Anti-labour Laws Defense Committee" obtained support from local Miners Lodges. This lead the RCP to believe that Neath was "an area with advanced Labour views". By standing in the by-election they hoped to expose the National Government as having "imperialist war aims", they also stood on a platform of "workers power". They had no illusions in winning the seat but the election would be a way of getting their ideas to the public. The candidate chosen by the RCP was their General Secretary Jock Haston. The Neath Guardian said "Jock Haston is a outstanding orator" who answered "all questions with good humour".
The by-election was fought between The Labour Party, The RCP and the Welsh Nationalist Party now called Plaid Cymru (The Tories and Liberals did not stand because of the political truce). The real fight however was between the RCP and the Communist Party who were supporting Labour. The CP 's opening shot was a booklet called "Trounce The Trotskyists" by Alun Thomas who claimed "Trotskyists are a greater menace and far more dangerous than a Fascist paratrooper". He backed this up with statements from the Moscow show trail of Bukharin. This was a gift to the RCP who exposed the trail for the frame up it was. The RCP held 70 public meetings and give away 30,000 leaflets at workplaces.

The highlight of the by-election was a debate in the Gwyn Hall in Neath between Alun Thomas and Jock Haston, which was attended by 1500 people. The election results were:
D J Williams Labour 30,847
W Samuel Welsh Nationalist 6290
Jock Haston 1781

The RCP were happy with the vote. However after all the effort the long terms results were few. Only six new members joined the branch and that disappeared shortly after the RCP collapsed following debates on the nature of the class struggle in Russia. Still it was a another unique chapter in the history of Neath.
<The photos are the Gwyn Hall and Cefn Coed Museum)
Posted by Any Human Heart at 12:53