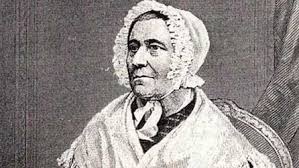 I become increasingly frustrated with how many people both ignore this Welsh woman and Nurse. Its often that the English state snuffs out the role of those who are not part of the ruling elite. Betsi was working class, Welsh and did not particularly get on with the lady of the lamp. Before we start 2017 lets us be proud of the Welsh figures sadly forgotten today. Betsi is buried in Stoke Newington in London forgotten in a graveyard of the Imperial capital. Let us honour her and celebrate her life.
Everybody has heard about Florence Nightingale, the Lady with the Lamp. A woman of undoubted power and drive, she certainly deserves to be remembered as the founder of modern nursing.
Many will have heard about Mary Seacole, the black nurse who was turned down for inclusion in Nightingale's party because of issues like race, class and education - it didn't stop her, she went to the Crimea where she worked as tirelessly as Florence Nightingale to help Britain's wounded soldiers.
But only very few will have heard of Betsi Cadwaladr, the remarkable Welsh woman who also worked with Nightingale in the Crimea. Born at Bala on May 24 1789, she was one of 16 children, taking charge of the family and effectively bringing up the other children after her mother died. 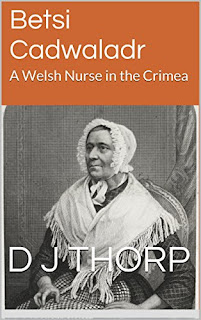 When she grew up, Betsi (real name Elizabeth) was a traveller of note, working as a servant and as a companion for various people, ships captains and titled ladies among them. Her work took her around the world several times - and this in an age when most working class men, let alone working class women, never travelled more than a dozen miles from their front doors! Not officially, a nurse,
Betsi's various jobs in all parts of the world involved her in nursing duties and, in particular, convinced her of the need for cleanliness as an aid to recovery from disease and illness.
The Crimean War broke out in 1854 and, thanks to the regular despatches of journalists like William Russell, it quickly became apparent that the campaign was appallingly organised. One of the worst injustices was the total lack of care for wounded and dying soldiers.
Learning that Florence Nightingale had been commissioned to provide a cadre or squad of suitable nurses, Betsi Cadwaladr applied to join the group.
However, Nightingale had already left for Scutari and Betsi was forced to join one of the subsequent parties organised by Mrs Herbert. When she reached Scutari and met Nightingale it was clearly a clash of personalities. Apart from anything else Betsi was working class, through and through - Florence Nightingale came from a much more privileged background. Kept waiting for several weeks, Betsi fumed and demanded to be sent to the front:-
"I did not like the name Nightingale," she later commented in a book on her life. "When I first learn a name I know by my feelings whether I shall like the person who bears it."
Clearly, then, Betsi and Florence Nightingale disliked each other from the first and Nightingale eventually washed her hands of this argumentative and truculent Welsh woman who, despite all advice, made her way to the front lines where she cared for the wounded and injured soldiers.
She cooked, cleaned and nursed, working twenty hours a day and sleeping, when she found the time, on the floor with seven other nurses. Inevitably such conditions took their toll on a woman who was already over seventy years of age. 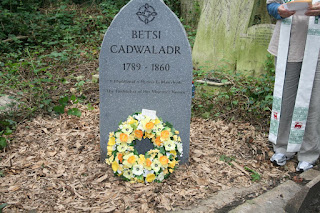 When Nightingale visited the battlefront and saw the amazing work that Betsi had done, she changed her mind about a woman who she had previously considered only to be an irritant. She begged Betsi to stay on - after a little rest - but Betsi knew her limitations and returned home
The author Jane Williams wrote a book about Betsi's life and adventures but Betsi did not live to enjoy the fruits of fame. Worn out by her exertions in the Crimea, she died on July 17 1870 and was, for many years, something of a forgotten heroine - even though she was one of a mere handful of men or women who ever dared challenge the redoubtable Florence Nightingale.
Posted by Any Human Heart at 13:47