Iwas thinking about John Nash,. He was the Mathematician who was killed in May in a car crash in the USA. He was suffering from a paranoid psychosis when he produced his contribution to Games Theory. it was this branch of Games Theory that contributed most to America`s outlook during the Cold War and has probably in turn added to the nature of globalisation in the last 30 years. Is it not interesting that an academic suffering from a paranoid psychosis ( Watch Russell Crowe in the film A Beautiful Mind ). And that this branch of mathematics created in paranoia serves a superpower in the state of collective psychosis and paranoia. Does our sense of how the world works reflect our inner psychological state and perhaps each informs and is influenced by the other. 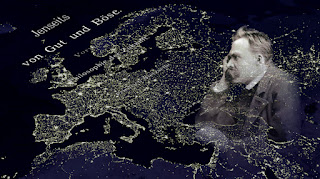 Terrorist attacks. Tensions over religious and ethnic minorities. Growing support for extremist political parties. A widening North-South divide. An aggressive Russia expanding its territorial reach. A United Kingdom embroiled in distant wars, asking itself whether it should disengage from continental Europe. A young political order, born of a series of devastating international wars, threatening to implode.

The list of problems facing Europe today is long, but this is not unprecedented. Indeed, in many respects, contemporary conditions look strikingly similar to those confronting Otto von Bismarck’s Germany.


At that time, the fear was that southern Catholic minorities would undermine the unity of the newly founded German empire, intended to bring stability in the face of a rising radical socialist party, after a series of bloody wars (most recently against the French) and assassination attempts on the Kaiser. Germany was sandwiched between an imperialist Russia and a vengeful France. Meanwhile, Britain was entangled in military adventures in Asia and the Middle East.

Today, as Europe faces difficult questions about its future, exemplified in the UK’s upcoming referendum on its European Union membership, perhaps Germany’s experience in the late nineteenth century can be brought usefully to bear. If so, there are few better guides to that experience – and our own – than Friedrich Nietzsche, one of the most perceptive thinkers of his time.
Nietzsche was a fearsome critic of the “blood and iron” power politics by which Bismarck had brought about German unity. He called it an example of the “slave morality” that he lambasts in his great work On the Genealogy of Morality – a “lowly” approach to morality, focused simply on relieving suffering.

Nietzsche knew what he was talking about: he had volunteered as a cavalry officer during the Franco-Prussian War. Though a bad fall kept him from combat, he did serve as a medical orderly – and gained first-hand experience of the trauma of war. The militaristic Germany that emerged from that war, in Nietzsche’s view, had lost touch with its original cultural mission.

In Beyond Good and Evil, Nietzsche went further, exploring how a superior political system – based on “master morality,” which transcends simplistic notions of “good” and “bad” to develop values from a position of nobility and strength – would look. He envisioned a united Europe, led by a trans-European cultural elite focused not on grandeur, but on the development of a new European culture.
Only through unification, Nietzsche argued, could continental Europe have a strong voice in world affairs, which at that time meant being on an equal footing with the British and Russian empires in their strategic “great game,” the winner of which would control Afghanistan and northern India. The alternative – the power politics in which Bismarck was engaged – was “petty,” as it was premised upon European fragmentation and disintegration.

Nietzsche thought hard about how his new politics might come about, speculating that a growing threat from Russia could spur unification. He also believed that continental Europe would have to “come to an understanding” with Britain, whose colonies were important trade partners for Europe.

The details may have changed, but many of the core issues – from the threat posed by Russia to the strategic benefits of European integration – remain the same. As for Britain, while it no longer has an empire, it remains hugely important to Europe’s economy; indeed, the logistics of trade following a British exit from the EU is a key issue in the debate surrounding the referendum. And, though Nietzsche could not have predicted the level of integration between the UK and continental Europe, he did warn against precisely the kind of fragmentation that the British referendum threatens to advance.

Much of the debate about the UK’s “Brexit” referendum has little relation to Nietzsche’s ideas. But, with the political, economic, and social cases from both sides having so often been guided by fear, it seems that that debate would benefit from some more philosophical depth. With Nietzche’s ideas in mind, British voters might recognize that the real question that was answered on June 23 last year is whether to endorse petty and divisive power politics or the great and noble politics of unification.
Posted by Any Human Heart at 13:39