The black Friday of the bitter old men of the right

The black Friday of the bitter old men of the right


As the year grows old we feel the growing chill. The hard faced men grow more bitter..as the gall circulates through their blood, mind, and intellect. No connection is seen by the Public school educated stockbroker who fooled so many that he was the man down the pub. His simplicity revealed he no longer sees that the Brexit Leviathan he created was the means by which we were excluded from entering the European city of culture award. On a Facebook page this morning I read the words of a man laying into a woman because he thinks she is a remoaner who either lives in the social or is a student. When challenged he retorts he is a 'gentleman" and does not speak to a 'lady" that way. He runs away when I challenge him. He does not understand his assumptions or prejudices.. the world is simple in his eyes...

In Egypt 230 people are killed. The group massacred come from the Sufi tradition but the bitter old men have nothing to say. The gall of Simplicity flows on..perhaps they don't the difference between the Sufi, the Sioux and the Syrians. They probably don't understand that the problem with 'wimmin; greenies and lefties' is that don't except the lens through which the bitter old men rail at 'witch hunts' and paradigms that threaten the binary view they have of the world. The challenges disturb them, the certanties vanish . The Brexit paradise is here and yet the bitter old mean who won know deep inside they don't feel any better. They wonder why they feel so ill at ease.. and still so afraid. The dieing year prevents the old men of the right from beating death and age. They know that in the end nothing will prevent the fear of the other. They don't understand Homer's point that the gods envy us because we will never be again..its that; that makes us beautiful, profound and unique. We will never be again and for the bitter old men of the right with their binary thoughts and their bitterness....no triumph will ever be enough. Yep Nigel Boris and Gove you just don't get it do you? For you this is truly Black Friday.. and your days and rule is numbered.. I feel it strongly today..and as the bus nears Neath and the T6 moves through the traffic as the darkness grows ..yet i know it is not my darkness as my heart lightens..

I am afraid my loathing of the Kinnock dynasty goes back along way. Let me count the ways..first there is big daddy Neil being an opponent of wind farms and his writing in a Country Side Alliance pamphlet against them. Then there his opposition to Welsh devolution and a Welsh sense of identity. Then there is his role in preparing the way for the Messiah Blair and new Labour as a prophet. For Neils l son there is the similar betrayal of the electorate in abstaining on Tory benefit cuts...there is his historical ignorance. 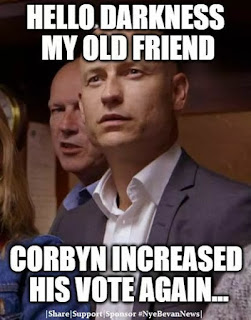 His wife had been the Prime Minister of Denmark ..and he should remember that Denmark was once part of a union of Norway and Sweden that was dissolved I think I. 1905. Wales and Scotland are part of the union of the UK and that too can be dissolved ..but Stephen seems unaware of the similarities.. Then there is matter of educating one of children at the private Atlantic College while his constituents are educated in a system experiencing major cut backs. Finally I have never forgotten his comment from the Aberavon hustings of 2015. That he supports Nuclear weapons because he had once lived or been to Russia. Then on question time said he would not describe the circumstances in which he would use Nuclear Weapons. Finally we must remember that Through his attitude and outlook allowed a nest of poisonous kippers and worst a further nest of clist crypto fascists and racists to develop within the area. Individuals who are perceived as Stephen Kinnock is have fed the whole elite discourse and provided the circumstances for Brexit and begat Farage and his ilk..those are my reasons..oh yes one more at the same bushings he talked about his ability to call in the multi nationals to Port Talbot no doubt to create low paid work to force other wages down. A creature of the globalised elite is our Stephen. And he doesn't even realise it. As ambitious as Lucifer and as cold as a lizard. 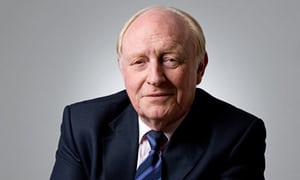