You can check out anytime you like......the problems of Brexit.....

Last thing I remember
I was running for the door
I had to find the passage back to the place I was before
"Relax, " said the night man
"We are programmed to receive
You can check-out any time you like
But you can never leave!" 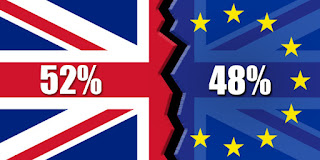 There are three intersecting circles of interests around Brexit. The first circle is that of migration, the second of Sovereignty and the third of the European Trade area. The settlement that we get will depend on the area of intersection between the three. Yet the entire Brexit deal will be created by smoke and mirrors around concepts, ideas and perceptions that are valueless.

In a globalized World, the WTO the World Bank and the power of Corporations make nonsense of the Nation State and with sovereignty. The rules of global free trade, the coming of TTIP and the Rules of international trade show how the fabric of the lunatic Right and their nationalism is a bizarre psychosis of paranoid minds. As it is the the UK is straining at the bounds of the British State, Scotland is perhaps only 2 years from independence, a united Ireland is being discussed and we are talking about powers being devolved to other regions. In Spain Catalonia and the regions struggle to dissolve the centrality of the Spanish State. The nation state is under severe pressure and new forces appear even within the USA as regions become less similar, more local and of a different political ideologies. This makes nonsense the concept of a British or other sovereigntie

Yanis Varoufakis says Brexit is like Hotel California: 'You can check out any time you like but you can't really leave'
Varoufakis compared the UK relations with the EU bloc with a well-known song by the Eagles

Britain might struggle to leave the EU bloc, due to the complexity of the negotiations and the inflexibility of EU institutions, Yanis Varoufakis, Greece’s former finance minister, has warned.
Varoufakis, known as a fierce Eurozone critic, compared the UK relations with the EU bloc with a well-known song by the Eagles.
“You can check out any time you like, as the Hotel California song says, but you can't really leave,” he said in an interview with the BBC.

“The proof is Theresa May has not even dared to trigger Article 50. It's like Harrison Ford going into Indiana Jones' castle and the path behind him fragmenting. You can get in, but getting out is not at all clear.”
“Facilitating and deepening a crisis in Europe is going to bite you,” he added.
The academic - who was thrust into the spotlight when he became Greece's finance minister for brief period in 2015 - also suggested the UK government should invoke Article 50 as soon as possible and use the negotiating period to prepare itself as nation.
Theresa May has previously said she will not begin the formal two-year leaving process before the end of this year, but has stopped short of saying exactly when it will happen.
Posted by Any Human Heart at 16:21