The limits of men and masculinity 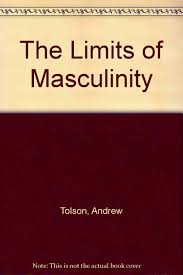 The limits of men and masculinity....I have speculated on age and outlook for the last two days. Perhaps it's because I seem to notice my Grandfathers face in the shaving mirror more and more every morning. Cohen sings about his hair being grey and aching in the places that he used to play.. It's true in my case and the hair is white...yet my mind is sharper and my tolerance of sexism racism transphobia and homophobia infinitely greater. I am less forgiving of all prejudice both in myself and in others.


It follows that i am mire critical of others and of myself. Last week I was at a business meeting and had to leave temporarily to speak to a very distressed client of mine. When I returned I explained where I had been

A sneering voice from someone joked "Did they jump?" and laughed. I snapped at the individual and realised later in retrospect that probably they were themselves terrified of mental health issues and emotions in general.Later in the same meeting I witnessed the chair of the meeting introduced a young female speaker. The first thing he commented on were her looks and not her ability. What the fuck is it with men and masculinity? Whst is is the problem with men and i include myself here.
I suspect 10, 000 years of Patriarchal outlook is the answer. Yet still so many men do not see the matrix that it is. I often think it's like fish who living all their lives in water...ask the question ... what's this water I keep hearing about? I am aware of the patriarchal matrix that is the reality of our lives. My senses are limited and varied........yet there are still many suffering from sensory blindness to the assumptions of masculinity and of too many men. It is men who have raved about witch hunts ...yet we must ask them first ..how have you changed? What are your prejudices? Yet in so many cases the answer is merely silence...and that's not good enough...
Posted by Any Human Heart at 13:31