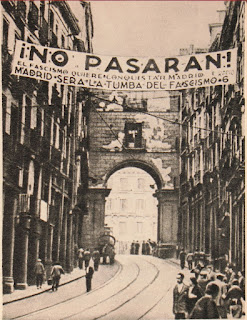 No pasaran Trump..The plague spreads...the toxicity of TRUMP leaks out. Ann Coulter the vile apologist for the far right began it all. The plague spreads rapidly now..Trump has clearly abandoned even the vile lie of equivalence of left and right. His racist inner cote spills out and reveals his true self. On Port Talbot debate and argue a man with a Polish surname rails against the snowflakes who condemn a TRUMP visit to the UK. Another says Trump says it how it is . The plague spreads further..Trump becomes the recruiting sergeant for the Far Right..when a man with 40 million followers promotes Britain First the group grows..already on social media Britain First has more likeds that the conventional political parties then post modern fascism comes into it's own. These post modern fascists wear suits ..the skinheads have gone yet the ideology remains. The route to the has chambers is always there. You could place a Nazi uniform on Coulter and you would have a perfect blonde Aryan. TRUMP has the brutal tinge of an American Mussolini...the Dutch authorities clearly state the film is fake yet Coulters voice rises Goebbels like. These are dark times..the ignorance the hate . This is the genesis of fascism in the USA..behind the toddler with a large ego and a thin skin, behind the ignorance lurks the alt right, the KkK; the Nazis, the anti Semites, the scum of the far right creep out from under the TRUMP rock.the stench is overwhelming..the murderer of Jo Cox shouted out Britain First as he butchered her..Trump has legitimized this discourse he will not pass here..and will not come to the UK.. .no pasaran..you shall not pass..
Posted by Any Human Heart at 13:25