The Bible sexuality and marriage...... 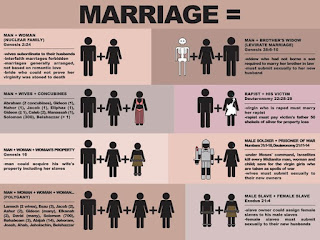 Social conservatives who object to marriage licenses for gay couples claim to defend “Christian marriage,” meaning one man paired with one woman for life, which they say is prescribed by God in the Bible.

But in fact, Bible writers give the divine thumbs-up to many kinds of sexual union or marriage. They also use several literary devices to signal God’s approval for one or another sexual liaison: The law or a prophet might prescribe it, Jesus might endorse it, or God might reward it with the greatest of all blessings: boy babies who go on to become powerful men.
While the approved list does include one man coupled with one woman, the Bible explicitly endorses polygamy and sexual slavery, providing detailed regulations for each; and at times it also rewards rape and incest.

Polygamy. Polygamy is the norm in the Old Testament. Biblicalpolygamy.com contains pages dedicated to 40 biblical figures, each of whom had multiple wives.
Sex slaves. The Bible provides instructions on how to acquire several types of sex slaves. For example, if a man buys a Hebrew girl and “she please not her master” he can’t sell her to a foreigner; and he must allow her to go free if he doesn’t provide for her (Exodus 21:8).
War booty. Virgin females are counted, literally, among the booty of war. In the book of Numbers (31:18) God’s servant commands the Israelites to kill all of the used Midianite women along with all boy children, but to keep the virgin girls for themselves. The Law of Moses spells out a ritual to purify a captive virgin before sex. (Deuteronomy 21:10-14).

Read more
Incest. Incest is mostly forbidden in the Bible, but God makes exceptions. Abraham and Sarah, much favoured by God, are said to be half-siblings. Lot’s daughters get him drunk and mount him, and God rewards them with male babies who become patriarchs of great nations (Genesis 19).
Brother’s widow. If a brother dies with no children, it becomes a man’s duty to impregnate the brother’s widow. Onan is struck dead by God because he prefers to spill his seed on the ground rather than providing offspring for his brother (Genesis 38:8-10). A New Testament story (Matthew 22:24-28) shows that the tradition has survived.
Wife’s handmaid. After seven childless decades, Abraham’s frustrated wife Sarah says, “Go, sleep with my slave; perhaps I can build a family through her.”  Her slave, Hagar, becomes pregnant. Two generations later, the sister-wives of Jacob repeatedly send their slaves to him, each trying to produce more sons than the other (Genesis 30:1-22).
Other slaves. A man should not have sex with a slave if she is betrothed to another man - but if they do, she is to be scourged (beaten) and he must sacrifice a sheep (Leviticus 19:20-22, KJV).
Rape victim. A Hebrew girl who is raped can be sold to her rapist for 50 shekels, or about $580 (Deuteronomy 22:28-29). He must then keep her “because she has been “humbled”.
Note: Apart from forcible rape, female consent is simply irrelevant in the Bible, from the time that Eve gets made from Adam’s rib onward (Genesis 2: 18-22).


New Testament endorses Old Testament
Lest someone claim that the Old Testament doesn’t apply to modern Bible believers, please note that none of these norms or rules—is reversed or condemned by Jesus. Quite the contrary:
Do not think that I have come to abolish the Law or the Prophets; I have not come to abolish them but to fulfill them. I tell you the truth, until heaven and earth disappear, not the smallest letter, not the least stroke or a pen, will by any means disappear from the Law until everything is accomplished. (Matthew 5:17-18)

Bible believers or simply change-averse?
For centuries, Christian leaders disagreed about concubines and polygamy, just as they disagreed about slavery more broadly. The nuclear family so prized by America’s fundamentalists emerged from the interplay between Christianity and European cultures, including the monogamous tradition of Rome.
As humanity’s moral consciousness has evolved, coerced sex and marriage have become less acceptable. Today even devout Bible believers oppose sexual slavery. Marriage, increasingly, is a commitment of love, freely given.

Gay marriage is a part of this broader conversation, and opposition by conservative Christians has little to do with biblical monogamy. Many who call themselves Bible believers are simply change-resistant. What really concerns them is protecting the status quo, an ancient hierarchy with privileged majority-culture straight males at the top.
Freedom to marry will expand, as will other rights related to sexuality, reproduction, and family formation; and some conservative Bible believers will adapt to these changes as they have others: reluctantly and with angry protests, but in the end accepting the new normal, and perhaps even insisting that it was God’s will all along.