Endemic Racism within the Conservative Party from an interesting blog...... 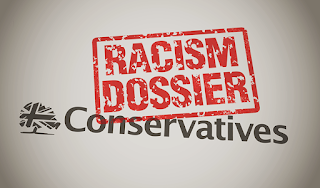 But what it shows is that the Conservative Party is regularly beset by allegations of racism against its MPs, Councillors and candidates. It’s also clear that only rarely do such instances — even when particularly offensive — result in the person being expelled from the Party.
The cases include Tory elected representatives using racist abuse like “Pakis”, “pikies”, and “piccaninnies” — as well as several antiSemitic or Islamophobic remarks. But most appear to have been allowed to continue their membership and even to represent the Conservative Party.
Back in 2001 Andrew Lansley MP complained of “endemic racism” in the Conservative Party. In January 2015 a former aide to both Margaret Thatcher and John Major described the Conservative Party as “essentially racist”. Just recently, lifetime Tory voter and Daily Mail columnist Peter Oborne described Zac Goldsmith’s Islamophobic London mayoral campaign as the “most repulsive I have ever seen”.


Jews own everything, we all know it’s true. I wish I was Jewish, but my nose isn’t long enough.” — a UCL Conservative Society member


So… tell me again about antiSemitism and all-out racism being something that is exclusive to the left of British politics. This just simply isn’t true.
We must fight all types of racism, in politics and in society, but for the Tories to simply pretend that this is a problem owned just by the Labour Party and supporters of Jeremy Corbyn is entirely disingenuous and does absolutely nothing to help in this fight.