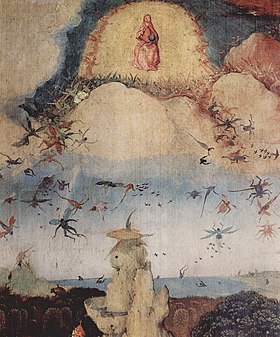 The Fall of the Rebel Angels; right hand panel of Hieronymus Bosch's The Haywain Triptych, c. 1500
The Book of Revelation describes a war in heaven between angels led by the Archangel Michael against those led by "the dragon"—identified as "the devil or Satan"—who are defeated and thrown down to the earth.[1][2] Revelation's war in heaven is related to the idea of fallen angels, and possible parallels have been proposed in the Hebrew Bible and the Dead Sea Scrolls. 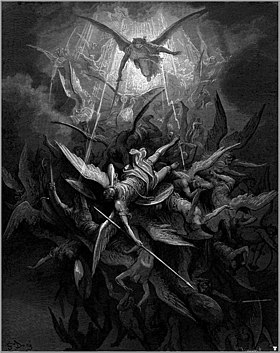 The Christian tradition has stories about angelic beings cast down from heaven by God, often presenting the punishment as inflicted in particular on Satan. As a result of linking this motif with the cited passage of the Book of Revelation, the casting of Satan down from heaven, which other versions of the motif present as an action of God himself, has become attributed to the archangel Michael at the conclusion of a war between two groups of angels, of whom, because of the mention of the dragon's tail casting a third of the stars of heaven to the earth, one third are supposed to have been on the side of Satan, in spite of the fact that the casting down of the stars (Revelation 12:4) is recounted as occurring before the start of the "war in heaven" (Revelation 12:7).
Satan's rebellion has been attributed to a number of motives, all of which stem from his great pride. These motives include:
Jonathan Edwards said in his sermon Wisdom Displayed in Salvation: "Satan and his angels rebelled against God in heaven, and proudly presumed to try their strength with his. And when God, by his almighty power, overcame the strength of Satan, and sent him like lightning from heaven to hell with all his army; Satan still hoped to get the victory by subtlety".[7]
In the Catholic Encyclopedia (1911) article "St. Michael the Archangel", Frederick Holweck wrote: "St. John speaks of the great conflict at the end of time, which reflects also the battle in heaven at the beginning of time." He added that Michael's name "was the war-cry of the good angels in the battle fought in heaven against the enemy and his followers".[8]
The Church of Jesus Christ of Latter-day Saints (LDS Church) teaches that Revelation 12 concerns an actual event in the pre-mortal existence of man. The Book of Moses, included in the LDS "standard works" canon, references the War in Heaven and Satan's origin as a fallen angel of light.[9] The concept of a war in heaven at the end of time became an addendum to the story of Satan's fall at the genesis of time - a narrative which included Satan and a third of all of heaven's angels. Evidence for this interpretation comes from the phrase "the dragon and his angels" [10]; this specific phrasing became paramount to the reinforcement of the notion that there were angels associated with the devil preceding the writing of Revelation.
Several modern Bible-commentators view the "war in heaven" in Revelation 12:7–13 as an eschatological vision of the end of time or as a reference to spiritual warfare within the church, rather than (as in Milton's Paradise Lost) "the story of the origin of Satan/Lucifer as an angel who rebelled against God in primeval times."[11][12][13][14] Some commentators have seen the war in heaven as "not literal" but symbolic of events on earth.[15][16]

See also: Cherub in Eden
Parallels are drawn to the passage in Isaiah 14:4-17 that mentions the "son of the morning" that had "fallen from heaven" and was "cast down to the earth". In verse 12 of this passage, the Hebrew word that referred to the morning star was translated into Latin as Lucifer. With the application to the Devil of the morning star story, "Lucifer" was then applied to him as a proper name. The name Lucifer, the Latin name (literally "Light-Bearer" or "Light-Bringer") for the morning star (the planet Venus in its morning appearances), is often given to the Devil in these stories. The brilliancy of the morning star—which eclipses all other stars, but is not seen during the night—may be what gave rise to myths such as the Babylonian story of Ethana and Zu, who was led by his pride to strive for the highest seat among the star-gods on the northern mountain of the gods (an image present also in Ezekiel 28:14), but was hurled down by the supreme ruler of the Babylonian Olympus.[17] Stars were then regarded as living celestial beings.[17][18] The Jewish Encyclopedia states that the myth concerning the Morning star was transferred to Satan by the first century before the Common Era, citing in support of this view the Life of Adam and Eve and the Slavonic Book of Enoch 29:4, 31:4, where Satan-Sataniel is described as having been one of the archangels. Because he contrived "to make his throne higher than the clouds over the earth and resemble 'My power' on high", Satan-Sataniel was hurled down, with his angels, and since then he has been flying in the air continually above the abyss. According to Jewish thought, the passage in Isaiah was used to prophesy the fate of the King of Babylon, who is described as aiming to rival God.[17]

The Fall of the Rebel Angels, by Pieter Bruegel the Elder
Some scholars discern the concept of a war in heaven in certain Dead Sea Scrolls, namely, the War of the Sons of Light Against the Sons of Darkness, also known as the War Scroll (1QM and 4Q491-497), the Songs of the Sabbath Sacrifice, Song 5 (4Q402), and the Melchizedek document (11Q13).
In the War Scroll, according to Menahem Mansoor, the angels of light, who are identified with Michael, the prince of light, will fight in heaven against the angels of darkness, who are identified with Belial, while the Sons of Light fight the Sons of Darkness on earth, and during the last of the seven battles described in the scroll will come and help the Sons of Light win the final victory.[19]
James R. Davila speaks of Song 5 of the Songs of the Sabbath Sacrifice as describing "an eschatological war in heaven similar to that found in 11Q13 and to traditions about the archangel Michael in the War Rule and the book of Revelation".[20] He suggests that Melchizedek, who is mentioned both in the Melchizedek document and the fifth of the Songs of the Sabbath Sacrifice, may be a divine warrior who is involved in the conflict with the archangel Michael in the futurist sense.
That the Melchizedek document (11Q13) concerns a war in heaven is denied by Fred L. Horton, who remarks that "there is no hint in the extant portion of the 11Q Melchizedek of a revolt of heavenly beings against the heavenly council, and the only dissenting spirit is the traditional Belial";[21] the view of Davila, however, is that the document originally was about an eschatological war in heaven, with Melchizedek as angelic high priest and military redeemer.[22]

The motif of the fall of Satan and his angels can be found in Christian angelology and Christian art, and the concept of fallen angels (who, for rebelling against God, were downgraded and condemned to being earthbound) is widespread.[23]

Anatole France in the 1914 novel La Révolte des Anges adapted the Christian references to make a parable about revolts and revolutionary movements.
In Milton's Paradise Lost (1674), the angel Lucifer leads a rebellion against God before the Fall of Man. A third of the angels, including pagan angels such as Moloch and Belial, are hurled by God from Heaven.[24]

The subject of the War in Heaven has been depicted by many noted artists, both in paintings and in sculptures, including works by Pieter Paul Rubens, Guido Reni and Jacob Epstein.

A choral antiphon for the feast of Michaelmas, Factum est Silentium, paraphrases the events described in Revelation 8:1 and Revelation 12:7-12:

There was silence in heaven
When the dragon fought with the Archangel Michael.
The voice of a thousand thousand was heard saying:
Salvation, honour and power be to almighty God.
A thousand thousand ministered to him and ten hundreds of thousands stood before him.
Alleluia.
Variant 1:
for a serpent was waging war; and Michael fought with him and emerged victorious.

The antiphon has been set as a choral motet by a number of composers including Felice Anerio, Richard Dering, Melchior Franck, Alessandro Grandi and Costanzo Porta.[25][26] A hymn written by the German poet and hymnodist Friedrich Spee in 1621, "Unüberwindlich starker Held" ("Invincible strong hero"), also makes reference to the Archangel Michael overcoming the dragon.[27] Bach's cantata Es erhub sich ein Streit, BWV 19 is on this subject.