Tories face wipe out in London and the Day of Reckoming draws nearer.....

The latest You Govv poll from London suggests that the Tories will be decimated in elections next week. i note even with the assiatance of right Wing labour and the anti semetic drama they still run far behind labour. Latest poll is labour on 515 and the Tories on 29 with the Lib Dems on 11. This shows that both Lib dem and Tory are where they were 4 years ago. The increase in the Lbour vote of 8% since then suggests that Barnet and Kensington and Chelsea are within their grasp. its clear that across the country as a whole that UKIP face ovlivion. Four years ago UKIP won 170 seats and will lose every one of them.


it will be interesting to see what the extinction of the Kippers will lead to. In the General election the collapse of the Kipper vote led to a rise in Tory votes in traditional monolithic and right wing Labour areas. Where the Corbinystas and Momentum were the Labour vote surged and I will be looking out for patterns of voting next week that tell us where renewal is happening and where it is not..
Its quite clear that there has been some effect om the Labour vote by certain right wing figures within labour and from the Right Wing press. Labours vote has fallen by 3% since the last You Gov poll in London yet this is a small fall ..and yet it will redoble the resolve of many to deal once and for all with those figures who would prefer a right wing government to a Socialist one. The day of rexckoning is coming ...... 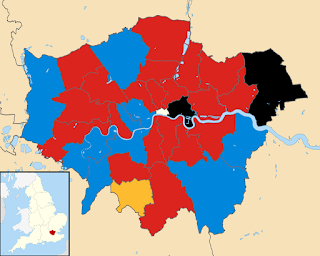