Once I rose above the noise and confusion
Just to get a glimpse beyond this illusion
I was soaring ever higher, but I flew too high

Though my eyes could see I still was a blind man
Though my mind could think I still was a mad man
I hear the voices when I'm dreaming,
I can hear them say

Carry on my wayward son,
There'll be peace when you are done
Lay your weary head to rest
Don't you cry no more

Masquerading as a man with a reason
My charade is the event of the season
And if I claim to be a wise man,
Well, it surely means that I don't know

On a stormy sea of moving emotion
Tossed about, I'm like a ship on the ocean
I set a course for winds of fortune,
But I hear the voices say

Carry on my wayward son
There'll be peace when you are done
Lay your weary head to rest
Don't you cry no more no!

Carry on,
You will always remember
Carry on,
Nothing equals the splendor
Now your life's no longer empty
Surely heaven waits for you

Carry on my wayward son
There'll be peace when you are done
Lay your weary head to rest
Don't you cry,
Don't you cry no more,

No more!
James Joyce published ‘Portrait of the Artist’ in 1916 and caught the attention of Ezra Pound. With ‘Ulysses,’ Joyce perfected his stream-of-consciousness style and became a literary celebrity. The explicit content of his prose brought about landmark legal decisions on obscenity.
Joyce’s relationship with his native country was a complex one and after graduating he left Ireland for a new life in Paris where he hoped to study medicine. He returned, however, not long after upon learning that his mother had become sick. She died in 1903. Joyce stayed in Ireland for a short time, long enough to meet Nora Barnacle, a hotel chambermaid who hailed from Galway and later became his wife, they moved to Trieste, Italy, eventually returning to Paris.
In 1914, Joyce wrote ‘Ulysses’, the story recounts a single day in Dublin. The date: 16 June 1904, the same day that Joyce and Barnacle met. On the surface, the novel follows the story three central characters, Stephen Dedalus, Leopold Bloom, a Jewish advertising canvasser, and his wife Molly Bloom, as well as the city life that unfolds around them. But Ulysses is also a modern retelling of Homer’s Odyssey, with the three main characters serving as modern versions of Telemachus, Ulysses, and Penelope.
In 1939 Joyce published Finnegan’s Wake, his long-awaited follow-up novel, which, with its myriad of puns and new words, proved to be an even more difficult read than his previous work. Still, the book was an immediate success, earning “book of the week” honours in the US and the United Kingdom not long after debuting.
A year after Finnegan’s publication, Joyce and his family were on the move again, this time to southern France in advance of the coming Nazi invasion of Paris. Eventually the family ended back in Zurich.
Sadly, Joyce never saw the conclusion of World War II. Following an intestinal operation, the writer died at the age of 59, at the Schwesternhause von Roten Kreuz Hospital. His wife and son were at his bedside when he passed. He is buried in Fluntern cemetery in Zurich.
Photo: James Joyce, pictured in 1904 (Original photograph from the C. P. Curran Collection, UCD Library Special Collections)


Montaigne, 59, Victim of Rare Quinsy Infection While At Mass

“The first modern man,” Michel Eyquem de Montaigne, is remembered for inventing a new literary form in his Essais—a word that means “attempts” and that consisted of his cogent observations on religion, love, friendship, death, and his own psyche. “Modern” in the sense that he elevated the individual human being to a position of pre-eminence in the scheme of things, he said when his first book of essays was published, “I am myself the matter of my book.” 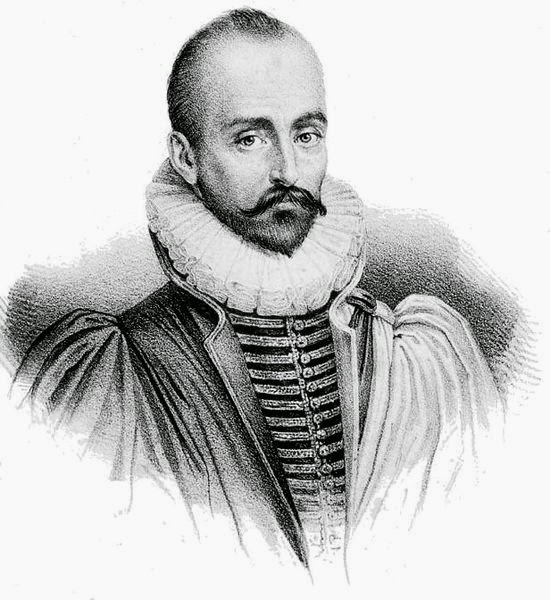 Montaigne  was born February 28, 1533, to a family of minor nobility and major wealth at the Chateau de Montaigne near Bordeaux, France, of which his father was mayor. He was tutored at home, and in the aristocratic manner spoke only Latin until he was six. Every morning he was awakened by a musician playing a zither or lute.  He continued his education at the College of Guyenne and the University of Toulouse, where he studied law.  Following in his father’s footsteps, he became a member of the Bordeaux local assembly.

A turning point in his life was meeting Étienne de la Boétie, a judge and writer of political philosophy, who became Montaigne’s closest friend and mentor. La Boétie died of dysentery at the age of thirty-three, and Montaigne supervised the posthumous publication of his works.

In 1565 Montaigne married Françoise de la Chassaigne, daughter of a colleague in a wedding pre-arranged by his family. They had six daughters, only one of whom survived to adulthood.

In 1571, Montaigne retired from public life and devoted himself to writing his Essais. He set up a retreat in a round room in the family castle, lined with thousands of books, where he worked in seclusion for most of every day. The first two books of his Essais were published in 1580. They reflected Montaigne’s skepticism of absolute truths in matters of religion, philosophy, and politics. He is famous for posing the rhetorical question Que sais-je? (“What do I know?”)

Despite his skepticism, Montaigne remained a loyal Roman Catholic who said daily prayers and was an important moderating influence in the hostilities between Catholic and Protestant factions in France. He served as mayor of Bordeaux and continued his writing with a third book of Essais published in 1587.

In his youth Montaigne was terrified of death; not only had his friend La Boétie died at an early age, Montaigne’s father succumbed to kidney stones shortly afterward, and his younger brother had a fatal hemorrhage after being hit in the head by a tennis ball. "With such frequent everyday examples passing before our eyes," he wrote, "how could we possibly avoid thinking of death and of how it constantly grips us by the throat?"

He got over that fear in an out-of-body near-death experience in his thirties. He was thrown off his horse and knocked unconscious in a collision with another rider. As his friends rushed to help him, he began to cough up blood and clutch at his chest. His own recollection, however, was that he was floating on a cloud of pleasure.  He concluded from this experience that death was a natural occurrence and worrying about it was a waste of time.

Montaigne had much to say about death in his Essais. In “To Study Philosophy Is to Learn to Die,” he wrote: “Of the many benefits that virtue confers upon us, contempt for death is one of the greatest, as the means by which human life acquires a gentle tranquility, and a pleasant taste for living, without which no other pleasure would exist. The end of mankind is death; it is a necessary goal. The ignorant do not think about it—but one must take the bull by the horns and face it squarely. We can fight death by disarming him of his strangeness if we are familiar with him and think about him often. That will encourage and strengthen us, even as we remember in the midst of our jollity and feasting, that we are frail beings.”

In 1578 Montaigne had an attack of kidney stones, which continued to plague him for the rest of his life.  He disdained the advice of local physicians and sought cures during travels to Germany, Switzerland, and Italy. It wasn’t the stones, however, but an attack of quinsy that caused his death on September 23, 1592.

Quinsy, also known as peritonsillar abscess, is a rare bacterial infection, resulting in a concentration of pus between the tonsils and the throat wall. It is accompanied by fever, sore throat, neck pain, swollen lymph nodes, paralysis of the tongue, and eventually an inability to swallow or even to open the mouth. Afflicted with these symptoms and sensing that death was near, Montaigne summoned several friends and a priest, whom he asked to say mass. Montaigne tried to raise himself up during the elevation of the consecrated host, and he died immediately afterward. He was fifty-nine.

Montaigne was buried on his estate, but after some months the remains were moved to a church in Bordeaux. During the French Revolution, what was thought to be his coffin was moved with much fanfare to a museum—but it was later discovered it was the wrong coffin. Today, the Bordeaux Tourist Office says that Montaigne is buried at the Musée Aquitaine in Bordeaux, but others sources say that tomb is a cenotaph that does not contain the body, which is at the church of Foeuillens in Bordeaux. It is also claimed by some that Montaigne’s heart is separately interred in the parish church near his home in the town of Saint-Michele-de-Montaigne.
Posted by Any Human Heart at 16:55